We Be Toys & Stuff

It can be surprisingly hard to spend your money in a recession.

One of Lauren's friends gave her a gift card to Toys R Us at her birthday present, and recently we unearthed it and attempted to use it up. Our first pass-through was mostly successful, in part because Lauren found a few things she wanted and in part because we thought the gift card was only half as valuable as it turned out to be, so we weren't looking for all that much to begin with.

But mad money can only be mollified by spending it, so today we had to go out and spend the rest. This was astonishingly difficult to do.

We wandered up and down the foot-wide cowpaths that pass for aisles in that establishment, looking at but not really being excited by anything on display.

I mean, Bratz? Even children have more taste than that.

Eventually Lauren did find a way to sop up her gift card, being a Good American Consumer, Because Otherwise The Terrorists Win. You know what she got?

And you know, they love these bugs. Lauren graciously allowed Tabitha to play with them as soon as they got home, and they had a grand time with the little Blocks O' Bugs, holding them up, examining them with the little magnifying lens that came with them, labeling them. 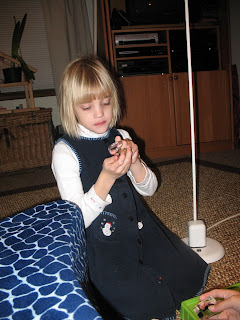 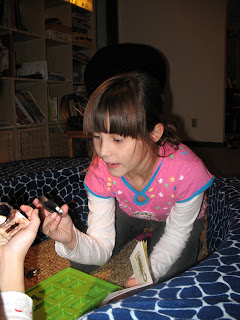 On the whole, I'm sneakily proud that Lauren chose those bugs and that she and Tabitha had such a good time with them. I'm glad they spent their evenings with something that might teach them something about the world around them, rather than something that would simply rot their minds and be forgotten.

I'm also really glad that the bugs are safely encased in lucite. Really, I am.
Posted by David at 8:03 PM