I have been the uber-volunteer today, giving of myself to worthwhile institutions, mainly because it seemed like fun and I had nothing more earth-shattering to do. I suspect a lot of things that happen in the world - adventures, foreign policy, investment banking, and so on - happen for more or less the same reasons.

This may or may not be comforting.

I spent much of the morning at Not Bad President Elementary School, making popcorn. There were four of us, and a large machine very much like the ones you see at the movie theater only bigger because we were right next to it instead of in a line thirty people deep five minutes before show time. I was in charge of pouring the popcorn into the machine, which involved a fair amount of Cutting Plastic Bags, not a little of Contorting Myself So As To Pour Things Into The Bin, and rather more of Covering Myself With Melting Coconut Oil than I had planned on when I woke up this morning. Someone else shoveled the finished popcorn into bags, yet someone else sealed and labeled the bags, and the final someone tallied the money.

It was Popcorn Day!

And not surprisingly when I picked up the girls this afternoon, they were toting bags of popcorn made by Dear Old Dad. I am The Provider. Hear me roar.

When the second shift of Popcorn Makers arrived, I scurried over to the local YWCA, where I am a volunteer archivist. They have all sorts of neat stuff, hidden away in boxes waiting for some nerd to come along and try to make sense of it all, and I am just that nerd. There are photos, news clippings, board minutes, letters, and all sorts of stuff. It is a playground for folks like me.

It is also in need of archival supplies, so if you know of any establishment that would like to donate same, please let me know.

I spent a happy couple of hours cataloguing photographs and generally making the place smell like popcorn. Such is not a bad definition of a good day, really.

And when Santa stopped by for a visit, well, there you go. Admittedly he was there for the kids in the day care room, but still. Never look a jolly old elf carrying gifts in the mouth, I say.

This evening, it was my turn to take Lauren over to her Daisy troop meeting, as it was on Tuesday to take Tabitha to her Brownie troop meeting. We are fully-scouted, and ready for action. I am not really a volunteer here, other than to provide transportation to and from, but that is enough in a week where I had to fight through a 5-inch snowstorm to drive Tabitha and then dodge an incoming 6-10 inch storm tonight.

Wisconsin: if you can see the roads, something is wrong.

Lauren loves her Daisy troop, and was eager to show me its full glories. Yesterday, in an effort to get me to come, she breathlessly told me that "there are so many girls in my troop that we have TWO girls named Brooke."

Now, a two on the Brooke Scale is something I had to see.

And indeed, it was impressive, in a thank-you-God-I'm-not-the-leader sort of way. There were about two dozen small, blue-vest/tunic-clad girls, most of them blonde as we live in the midwest, and all of them emitting a field of happy conversation dense enough to warp your glasses while at the same time moving in a swirl of constant motion. Scientists looking at electron clouds see this sort of thing, only without the verbiage.

Lauren had a grand time. 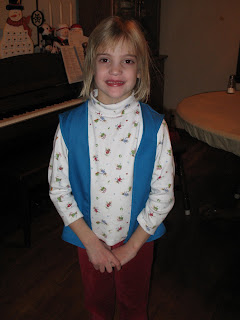