And so our extended Christmas has drawn to an end, and we are all sprawled about the house like so many dried leaves. There are toys all over the living room, a movie playing on the television, and a dense, "explaining-the-sub-prime-mortgage-crisis"-like fog blanketing the entire state.

We started on Christmas Eve, which has always been the major holiday on my side of the family. Christmas Day was a casual day, where friends and family would come over to visit and graze. Christmas Eve, though - now that was the Big One. We would gather up our presents and make the arduous 4-mile trek (uphill! against the wind!) through suburbia to my grandparents' house. Us kids would all immediately head down to the basement for air hockey, while the grownups did whatever grown-ups did in the 1970s. Possibly drugs. Although pasta was the drug of choice for us, which shows how cutting edge we were. There would be seven kinds of fish for dinner - an odd number, for luck - and after church we would open presents.

A lot has changed since then. We've all moved up a generation now, for one thing. And we've cut back on the meal. It's still seafood, but as my dad likes to say, "You know, one is an odd number."

This year was a Wisconsin year and we normally go up to Kim's family for Christmas Day, so it was just the four of us for Christmas Eve. We puttered around getting ready, and - there being nowhere to go, so the demarcation between "preparations" and "celebrations" was rather blurry - settled in for the holiday.

We actually made it to church this year. It had been so long since we'd done that that they had removed us from the church directory. Oops. Maybe we should go more often, I suppose.

Christmas Eve services are always somewhat risky, though, because of the possibility of Choir Director's Disease. People like us, who don't go to services very often, look forward to the traditional songs with their traditional melodies. We know them. They're comforting. They make us feel like we're part of the routine. But choir directors live with this stuff all year 'round. They're BORED with it. They want something new, something exciting, something different. Or at the very least, they want to sing "Away In A Manger" and "Oh Little Town of Bethlehem" with the alternate tunes that nobody knows but them, so the rest of us end up just standing there not singing, feeling vaguely stupid and waiting for something recognizable to come along. Choir Director's Disease is not limited to this situation - corporate management is particularly susceptible to this kind of boredom-inspired change-for-the-sake-of-change as well - but it does make the holidays feel just a bit out of kilter when it happens.

Fortunately, no outbreak was reported at our church, and everyone was happy to see us lost sheep. A good time was had.

We then went home and had dinner: three kinds of seafood (three is an odd number too). And then it was presents time!

We've been opening presents by speakerphone with my family out east for the past few Wisconsin Christmases, but this year we had Skype! So we could open them by videophone! We could actually see what was being opened! Truly, this is an age of miracles.

There was much pandemonium and largesse. It was wonderful.

And then there was dessert, which just made the whole day that much better. Kim made rice pudding, and I'm hoping this becomes a tradition.

Getting to sleep that night was not nearly as difficult as you would think. The girls are confident enough not to be all that worried about the morning, and by the time we managed to get upstairs it was late enough that they were ready to keel over anyway. As were we. They set out water and cookies for Santa, and oats and carrots for the reindeer, and we all went to bed.

The next morning, Kim and I were up long before they were. There was no 4am rush into the bedroom - not this year, not ever. It's nice that way. And Santa did in fact come bearing gifts, which made it even nicer. 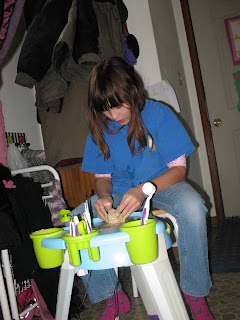 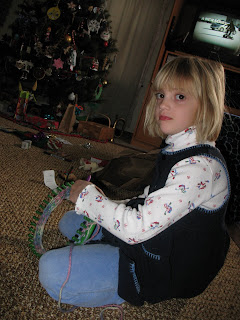 Since Christmas with Kim's family had been rescheduled to the 26th due to work schedule considerations, that afternoon we all piled over to visit our friends Dan, Theresa and Grace. There was much good food, good drink and good company as the girls headed off to do their thing while the grownups did theirs. There was pasta, the family drug of choice, so that tradition continued too. 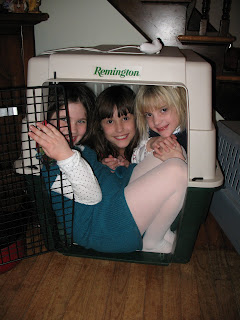 There was also a Wii.

I'd never tried a Wii before, but there is a first time for almost everything except sushi. It turned out to be educational, and I learned a few things. I learned that steering a rabbit with your butt is not as easy as it sounds. I learned that bowling on a computer is even nerdier than bowling in person, and I speak as both a two-time captain of my high-school bowling team and an academic historian so I feel fully qualified to make that kind of judgment. I learned that virtual boxing with one's wife is just an open invitation to trouble. I learned that you should never play these games with small children, as they will clean your clock. I learned that virtual reality is now so sophisticated that you can replicate precisely the kinds of injuries you would have gotten had you been doing this in real life. I learned that the Wii is fun, but that there isn't enough whiskey in the barrel to make me want to buy one of them. I learned that this is a battle I will lose.

Yesterday, we drove up to Kim's parents' for the third day of our Christmas. As usual, it was a festival of good people and extensive quantities of good food, though not the full-court-press Ukrainian dinner that we normally have for Wisconsin Christmas. We did that when Uncle Geoff visited in October, and the recovery time required for such a spread prohibits having another that close. 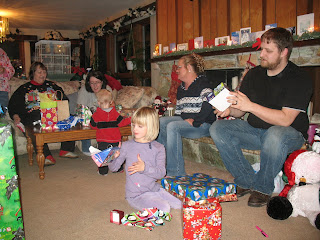 Both sides of the family have been scaling down the gifts the last few years, even prior to the current economic meltdown. We've all reached a point in our lives where if we want something we can go get it, so we reserve most of the gift-giving for the kids. But you have to have something, after all, and so we play The Game.

The Game has no name, but it does have rules. You bring one nice thing and one goofy thing, which combined can cost no more than about $30. You set them up in six piles, and everyone takes turns rolling a die, choosing a present from the appropriate pile and unwrapping it. When everyone has two presents, a timer is set up and people roll a pair of dice. Doubles, and you get to swap what you have for what someone else has, until time is up. In Philadelphia, we play this with my generation of cousins. In Wisconsin, everyone except the kids plays. 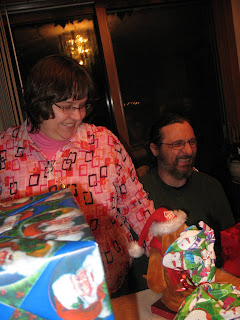 There is nothing to promote the Christmas spirit of peace, love and fellowship like taking someone's nice fleece blanket and leaving them with an 18" cookie jar in the shape of a pig wearing an apron emblazoned with the words, "Kitchen Diva." Oh yeah - feel the love flow like eggnog down your chest and into your underwear.

I ended up with a metal bowl on cat feet, complete with bobbling head and tail, and also a television remote roughly the size of the actual television.

We had planned to go home, but instead stayed the night because of the fog. When 45-degree weather and an inch of rain intrude on 18 inches of ground-cover snow, things get ugly fast, and we had no pressing place to be this morning anyway. The girls got to sleep downstairs bundled up on the big couch and ottoman, while Cousin Kegan got the regular couch. It was an adventure.

As was driving home. 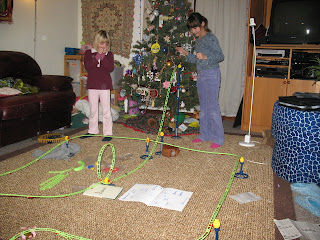 Merry Christmas, one and all!
Posted by David at 6:51 PM

Your daughters, Tabby and Lauren.