We Are What We Are

There was a time when I believed in nature more than nurture, when I thought that the environment in which a person grew up had more influence on them than their genetics or inherent, inborn personalities. That time was before I had children.

Yes, of course environment matters. People respond to what is going on around them. Well, people respond to what they think is going on around them, which may or may not be the same thing, but that is another matter for another day. And yes it is all too possible to bend people this way or that by doing things to them or placing them in this or that situation. But the fundamental basis of a person is not formed this way.

Sumos quod sumos. We are what we are.

The question is, what exactly are we? And here the families disagree.

When I look at my daughters, I see my grandmothers. Tabitha, for example, is the spit and image of my mother's mother. She has the same features, notably the eyes, which were passed down from my mother to me to her. She can, in fact, look spookily like her, viz: 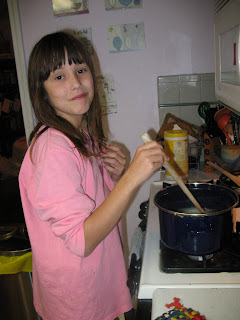 This, folks, is Nana, in a pose I can recall from any number of occasions from my childhood.

On the other hand, Lauren is very much like my dad's mother. She has the same general attitude toward life ("here I come, so deal with it"), and much the same jawline. She even has a liking for grapefruit, a substance which provided Grandmom with a significant percentage of her nutritive needs for many years, along with sardines, coffee, and Benson & Hedges Gold 100s, none of which have we tried on Lauren yet. 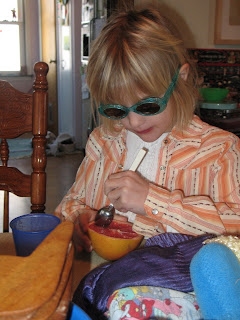 Now, Kim's side of the family respectfully disagrees, at least about Lauren. When they look at Lauren, they see ... wait for it ... Kim's grandmother! Odd how that works out.

Kim also likes grapefruit, so perhaps they have a point.

Tabitha, though, is clearly Nana. Even Kim's family - most of whom never met Nana - can find no reasonable alternative. If it weren't for the fact that Nana was still alive when Tabitha was born, we would swear that Tabitha was her reincarnated.

It's those pesky details that get you every time.

But you know, they are not my grandmothers, or Kim's. They are themselves - an amalgamation of genetics, environment, and whimsy in constant motion. They are unique individuals.

Neither Tabitha nor Lauren has really changed since they were newborns. They have become more so, in many ways, and along the way they have acquired new and vital life skills like eating, speaking, and rejecting George W. Bush's failed policies and lunatic ideologies, but the real basis of who they are was apparent from the start and has remained.

They are who they are.

There's a blues song in there, somewhere.
Posted by David at 11:12 PM