Tabitha and I continue to work our way through The Lord of the Rings. 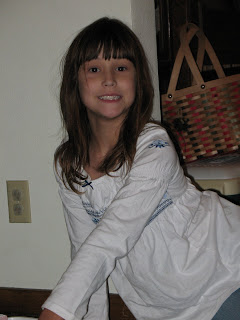 We've left most of the characters frozen in place somewhere in western Rohan and are now journeying with Frodo, Sam and Gollum through Ithilien. Faramir has appeared to complicate things, and eventually we will end up taking the scenic route into Mordor, where the shadows lie.

Every time I read this book, I notice something different. It has been a while since the last time, and in the intervening years I have grown more and more acclimated to the midwest, where "just down the road" does not mean what it means in the Northeast. Where I grew up, "just down the road" meant that you could see it from where you stood, or at least you could if the buildings across the street should mysteriously burst into flame and fall into their own basements, as sometimes happened in Philadelphia. Here in Wisconsin, though, "just down the road" can be anything up to a half-hour drive and encompass significant chunks of neighboring counties.

It's a matter of scale.

The Lord of the Rings was clearly written by someone who spent the bulk of his adult life on an island where nothing was all that far from anything else - at least not by midwestern standards.

From Hobbiton, where the story begins, to Mordor, where it arrives at its furthest point, is a distance of about a thousand miles. It takes these characters over 1200 pages to walk that distance, and something like a year in their own time. It's a very long way to them.

But a thousand miles is not all that much more than the distance from Madison to Philadelphia, a distance we routinely drive - with children - in two days and which, on a singularly memorable occasion, I covered in one.

The stage of the story we're at now takes several chapters' worth of journeying to cover about thirty leagues. For those of you not up on your Archaick Unitse yf Diss-tance, that's more or less ninety miles, depending on one's definition of "league" and "mile" - or roughly my one-way commute last year.

We have lost the sense of distance that informed Tolkien's world. In Middle-earth, everything is both closer together and, for all practical purposes, further apart than it is in the middle west, and this can be difficult to get across. As I read this to Tabitha (she could read it herself by now, but that would miss the whole point of the shared experience), I try to put things in terms she can understand - measurements; centuries; the fine gradations of rank, honors and office that show up in just the oddest places throughout the story; all of these need some explanation, some grounding in the reality she can see around her. Tabby takes it all in stride most of the time, but the distances sometimes throw her because she can move that far so much faster than the characters can.

The past is a different country, even the made-up past. They do things differently there.
Posted by David at 11:38 PM