It's Christmas Time in What Passes For The City Around Here

In the spirit of peace, love and Christian fellowship, we went out and killed a tree this afternoon.

Christmas trees are wonderful things. You can decorate them with ornaments ranging from the beautiful to the sentimental, categories which oddly enough don't often have a great deal of overlap. They serve not only as devices for storing presents, but also as room air fresheners and cat toys. And they force you to vacuum when you're done. What's not to like?

We prefer to get real trees, though we can only do that in years when we're not headed east for the holidays. Having a real tree get drier and browner over Christmas vacation while we are away is just a recipe for Four-Bedroom Flambé, so we have an artificial tree for those years. It came with the lights already on, which is its only other advantage over the real thing. These are not inconsiderable advantages, admittedly, but we still prefer the real ones.

But when we're home for the holidays - oh, my, yes. Come to me, my pine-scented sacrificial lamb.

Tree hunting has quite a history in my family, going all the way back to the late 1950s when Grandpop and his buddy George used to go out and chop down their own out on a farm somewhere. By the time Keith and I were growing up, the tree hunt had morphed into a family event. We would drive out to Downingtown, where George and his family lived, and all the menfolk would go out with tools of war and slay us some trees. And not just any trees, mind you - they had to be The Trees, plump and green, with full branches and strong tops for the angels. Mighty trees, often requiring some surgery to get them into the house. Things just look smaller out in the open than they do in your living room.

And then there would be lunch.

Our tree hunt this year was a bit shorter, but no less in the traditional mode.

We drove outside of town to the local tree farm, and spent a few minutes admiring the reindeer that they have penned up there. He's kind of sad these days since his partner died a few years ago, but the visiting children keep him fed to the point of coma so we figure he isn't feeling too much pain.

We then slogged off through the snow in search of The Tree. Now, when I used to do this as a child I remember this search taking upwards of 36 hours. Grandpop was always particular about his trees that way. Our search was far more brief, as befit a day that was windy, cold, and rather grim. With Tabitha and Lauren gamboling from tree to tree and Kim and I following gamely behind, we quickly settled on a nice looking one on the edge of Section C. Tabby and I stood guard over it while Kim and Lauren tracked down the Bright Orange Man With The Saw. With a thunderous roar - or at least as thunderous a roar as a tree only slightly taller than I am can make - down the tree toppled. 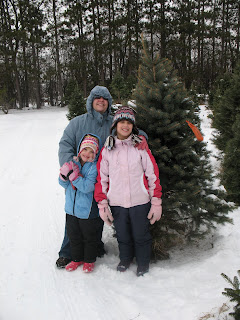 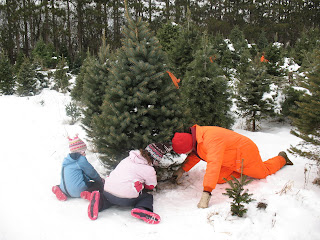 We hauled it to the Tree Wrapping Place, where it was bound in cling-twine - a substance only marginally less adhesive than Gorilla Glue - and then it was bungeed to the roof of the car for the short ride home. Fortunately, the ride was at highway speed, so all of the snow and ice in the branches had a chance to blow off and blind the people driving behind us. Hey - we're in Wisconsin. If you can't drive blind through the snow, you shouldn't be here. 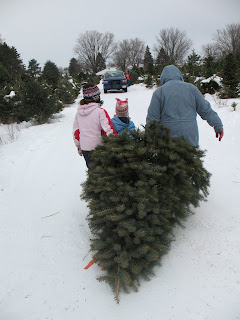 It's up in the living room now, after an epic struggle with the cling twine that nearly cost me a coat hanger, my winter jacket, a doorknob and a decent steak knife, the details of which are not credible. The house smells like pine, and tomorrow we decorate. Life is good.

Now, killing a tree was not the only Christmas-themed event for today - no, no, far from it. We also went to see Santa. Whom we did not kill.

At this point in our lives, going to see Santa is an interesting proposition. We're pretty much at the "Yes, Virginia" stage with Tabitha, and Lauren is nothing if not observant about her big sister. She has faith, though, and that's nice to see.

My former employers were holding a Victorian Christmas display, with a friend playing the role of Santa - a role he was born to play, now that the French Resistance has driven the Nazis out of Paris.* So we headed up to the museum to check it out.

It was a festive affair, with all sorts of friends roaming about and food upstairs and down. And off in the corner, there was Tom in a 19th-century sleigh, surrounded by children.

Lauren climbed right up and began talking. She knew very well that this was Tom playing the role of Santa's helper, but she had been looking forward to this moment for months, she had a lot to say, and by gum she was going to say it. Tabitha took a little convincing, but eventually she too climbed aboard and had a pleasant conversation with Tom - one that focused more on the vagaries of third grade than anything that might be construed by outsiders as a standard visit with Santa. 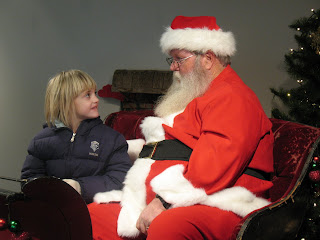 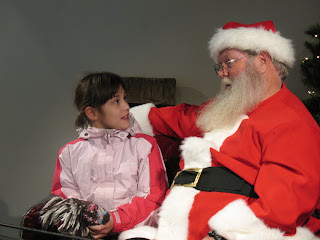 We stayed for a while and then we had to go cruising off to get a few errands done. It was nice to see everyone, and to visit with Santa. 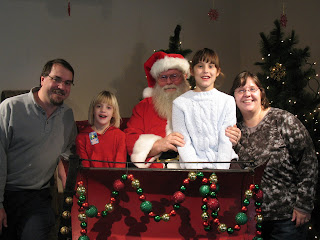 You gotta believe, yes you do.