Narrator No. 1: A Star is Born

This afternoon, an exciting new talent was unleashed upon the thespian world in the Not Bad Elementary School's Kindergarten Winter Sing production of "Bailey the Bear." I refer specifically to Lauren, who had the critical role of Narrator No. 1, introducing us to the titular Bailey and explaining his self-inflicted plight and its resolution in such a way as to make the whole thing actually make some sense.

This was not an easy thing to do, and Kim and I are very proud of the way Lauren stood up there and delivered her lines with aplomb - even managing to backtrack and improvise in such a way as to get all the information out there without cluing in anyone who had not actually read the script that a mistake had occurred. As a veteran of some twenty-five years of theater tech myself, I can honestly say that such backtracking is a mark of skill. Anyone can make mistakes, but not many can cover them up without letting on.

I arrived early enough to get seats, which was no mean feat. The First Grade Winter Sing (also, oddly enough, "Bailey the Bear") was the previous hour, and not only did I have to wade through all the parents from that event, I also had to Moses my way through the Red Sea of incoming Kindergarten parents who all knew, probably from previous experience with previous siblings, just how limited seating is in that auditorium/lunchroom/gym. Kim managed to duck out of her classes long enough to see the play, and arrived just before curtain time.

The play itself was fairly straightforward. Lauren announced that "Once upon a time," (always a sturdy beginning for a tale) "there was a bear named Bailey," at which point Bailey says, "Hi there." 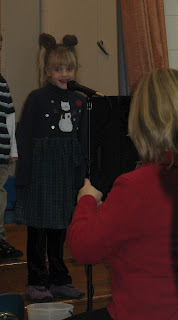 It seems Bailey was a generous sort, prone to giving away all of his honey and his bedspace to those in need. Eventually, he runs out of both and is shivering, homeless and honeyless, out on the streets of Not Bad President Elementary School.

At this point, the play takes a decidedly midwestern turn. "Let us help you!" chants the chorus of bears in the stands. "No, no, that's all right," says Bailey. "I'm okay."

"I'll be fine, I'll just sit here, in the dark. You go ahead and eat and stay warm."

"Yes, of course. Don't worry about me, who gave you all that honey and even the bed out of my bedroom. Enjoy yourselves. I'll be fine right here. On my patch of ice. Alone."

And on and on and on. Bailey clearly has some issues with passive aggression, the official Wisconsin state psychosis. But it all works out in the end, as the bears sing an enchanting song about learning to accept help from others, and he gets some of his honey back (his own honey!) and a place to sleep.

Eventually the play ended, and we all went home. Variety will be doing the story next week, but until then, we count ourselves happy to have been there at the beginning. 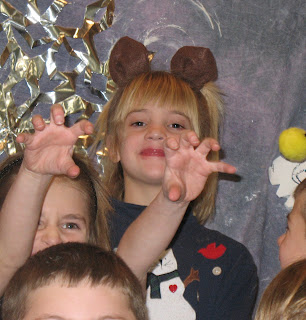