She Shoots and Scores!

Since Grammy and Grandpop were unlikely to make the long drive to Wisconsin twice in four weeks, we decided to have a bit of Christmas early and let the girls open the gift that had been hauled across the country for them. Well, kind of. Actually, Grandpop and I opened it and spent the better part of a morning doing all of the hammering, screwdriving, allen-wrenching, cable-running and all-purpose swearing that went with putting it together. But it was worth it. 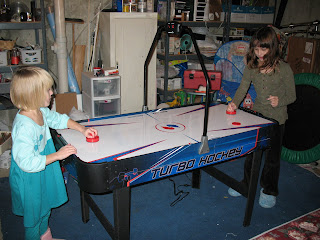 And they have, as we rather suspected they would - those lazy afternoons pouring quarters down the hole at the seaside arcade sure do pay off in the end. The lure of the air hockey table has even been sufficient to draw them down into our cold, cold basement, surrounded by the cozy glow of the irony of freezing your extremities off mere feet from the furnace. Whack! Whizz! Boombambamwhirrka-chunk! Gooooooooooooooooaaaaaaaal!

My grandfather bought one of these things for the collective use of his grandchildren sometime back in the depths of the 1970s, and it was some of the best money he ever spent. He set it up in his basement, which was as clean and orderly as you would expect a basement that belonged to a man who used double-entry bookkeeping in his checkbook and no longer shared his living space with small children to be. There was also a dart board, for when we got older, a portrait of John F. Kennedy on the far wall, and team photographs of the Phillies tacked to the cabinet doors under the stairs.

As soon as we hit the house on holidays, all of the cousins would race through the living room and dining room, hang a hard right into the kitchen and an even harder right down the narrow, low-ceilinged stairs to the basement where we would fire up the of air hockey table and settle in. I was the oldest so I had an initial advantage, though my general lack of skills tended to cancel that out. Keith and Chris were closer in age, so they usually wanted to play each other, which meant I ended up playing Paula a lot. Eventually Elizabeth got old enough to play too, though by that time there was usually also a darts game going on at the same time.

Some of those games got fairly intense, with the puck flying across the table and our round paddles zipping to and fro. We experimented with various ways to make the pucks fly faster and with strategies for better shots, neither of which ever really worked. But mostly it was fun time - time for the cousins to hang out and spend time together, since we lived fairly far apart in those pre-internet days. We would play hockey and talk, having a grand time down there until it was time to go up to eat.

Meanwhile, the adults were upstairs, having uninterrupted conversations. It was years before I figured out that this was not an accidental byproduct of the situation.

Eventually the air hockey table fell silent. We all got bigger and moved away. Holidays moved to Grammy and Grandpop's house (and occasionally Uncle Bob and Aunt Linda's house) as Nana and Pop-pop's health deteriorated. Eventually they passed away, and the house had to be sold. By the time my dad cleaned out that basement, there really wasn't any point in trying to salvage the table.

But now, air hockey lives! Now all we have to do is round up some cousins.
Posted by David at 9:44 AM