It was IKEA day here in Baja Canada, so we piled everyone into the car and headed south to Chicagoland for some Swedish good times.  I suppose it says something about the stage of life we're at that "Swedish good times" tends to mean furniture and not anything illegal in Alabama.  Though I've never been to Alabama and for all I know Swedish furniture is indeed banned there, so I suppose I should hold my judgment until I know for sure.

IKEA is Kim's favorite store. What Barnes & Noble or Amazon.com is to me, IKEA is to her. She could spend days there, exploring all the various unpronounceable products and figuring out new ways to optimize our lives with each and every one of them.

Me, I'm a bit more ambivalent. It's not like Home Depot or Menard's or any of those other home improvement stores, which only exist to point out some of the more glaring of my many shortcomings. I have a defective home repair project gene and those stores are just giant reminders of what I will never be able to do. I suppose I could learn, but that would imply interest, and so far that hasn't materialized yet either.

IKEA isn't on that level, though, not really. For one thing, most of the items in there can be assembled by idiots using only an Allen wrench, so that's right up my alley. I can twist cams with the best of them. And for another thing, it is full of interesting little gizmos and gadgets, many of which can simply be purchased and used as-is, such as wine glasses.

Plus, they serve meatballs.

We're in the middle of a giant home repair project in our mudroom - the little antechamber of our house right as you come in the front door that nobody ever uses. Really, who uses their front doors anymore? The garage is in the back, so we enter through the back. But there was a closet in the mudroom that was offensive in its suboptimability and so it has been removed, leaving us with the question of what to do with the newly liberated space. 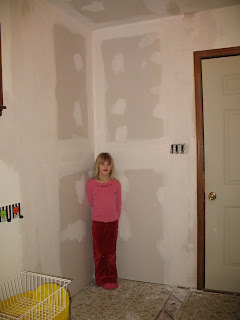 So down we went, and there we stayed for six hours - examining, plotting, discovering, and, occasionally, bashing each other over the head with feather dusters, because after a while you just go stir crazy and want something good and American in the midst of all that Swedishness and what's more American than random senseless violence? Especially when it's played for laughs.

We ended up filling the car up to the brim with things called "Gorm" and a less dignified way to die in the event of an accident is hard to imagine. But we made it home safely and all of the Gorm is outside, waiting to be unloaded in the daylight.

We are no longer gormless.
Posted by David at 10:54 PM

Thanking God for that. Hate to be missing our gorms.

That unplastered spot that Lauren? Tabitha? is stading in is about as big as our first FULL bathroom.
While sitting on the john, I could brush my teeth and rest my feet in the shower. I don't miss that.
What did you do with the space? A bookshelf?

We haven't done anything with the rest of the space yet, but someday it will be full of bins, shelves and hooks for mittens, boots and coats respectively.

And a vacuum cleaner.