It took three tries, but Tabitha is now officially ten.

The joy or burden of having birthdays around the holidays is that there is never really any good time to celebrate them. There is always something else happening, or something else being prepared to happen, or something that just happened that you need to recover from, and really, who needs another happening on top of all that? This is why I long ago happily relinquished all pretences at having birthday parties - send me a card and we'll go get a good meal, and that's all I need to be content with it.

But Tabitha is still young, and birthdays mean more when you've had fewer of them. They stand out a bit.

We had one party down in Tennessee, with a cake and the extended East Coast branch of the family on hand. There was another, smaller, one actually on Tabitha's birthday - this one being just the immediate family. But if you're going to have a birthday party - a party, mind you, not just cards and a meal - you need friends around to celebrate with you.

Which is why we finally had Tabitha's birthday party today.

This year Tabby decided that she wanted an ice-skating party, which suited us just fine. For a small fee we could go down to the ice rink and have everything there and someone else would clean up and we wouldn't have to clean the house beforehand. Win.

Invitations went out early this week or late last - there being some discrepancy in the accounts given - and this year for the first time there were (wait for it) boys involved. Two of them, in fact, both of whom said they could come. I suppose this is a harbinger of things headed our way, and I will be investing in a shotgun and a fair amount of whiskey shortly. 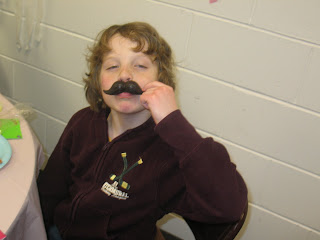 When things came to it today we were actually doing pretty well. Kim and the girls had put together the gift bags that are now required for each guest - Kim had ordered a fair amount of useless but fun stuff to put in them, and in the event it turned out that they were quite well received. I had put down the deposit on the ice rink's party room earlier in the week - a rather eerie process that had me walking into an unlocked, dark and apparently unoccupied rink armed only with a checkbook and a firm conviction that untoward things only happen to other people. Eventually the janitor came out of the men's room and we got the whole deposit thing straightened out. And finally, Kim and the girls spent this morning making cupcakes, frosting them, and arranging them artfully in the shape of a 10.

We even had time to sit and watch the Evil Empire of Football get crushed by the Locally Hated Evil Empire of Football. For Wisconsinites, watching the Cowboys and the Vikings play is like watching a re-run of the Iran/Iraq War, where you have to try to figure out which side you dislike more or invent a way for both sides to lose, one or the other. As someone who grew up in the NFC East, of course my second-favorite team is whoever is playing the Cowboys, but it's a much finer line here.

And then it was time to go.

And that's where it all started to fall apart. Not from Tabitha's perspective, fortunately, but from a planning perspective, definitely.

The first sign that things were not going to go as planned was when the tray full of carefully baked and arranged cupcakes snagged on the rear-view mirror of the truck next to us in the parking lot, with predictable slapstick results. So once we got settled in the party room, I was sent off to buy a bakery cake for the rest of the guests while Tabitha could have the un-road-salted cupcakes. Fortunately, she's mature enough to handle that, and it went well. Also, fortunately, I was already out on the road when the call came that we had forgotten the ice cream and I should go home to get it. I did have to make a separate trip for camera batteries, but by then I was sort of expecting it and the third strike wasn't so bad.

But did this faze our party-goers? Not one bit! 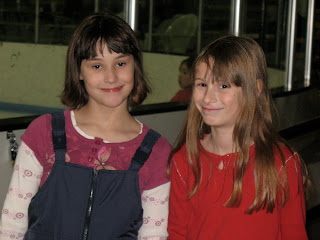 Tabitha and her guests spent a happy hour zooming around the ice rink and/or decorating the party room, whichever their tastes led them toward (this is how you know that it was a party for girls, since a group of 10-year-old boys would never have even conceived of staying behind to decorate, whereas about half of the girls ended up chipping in one way or another). 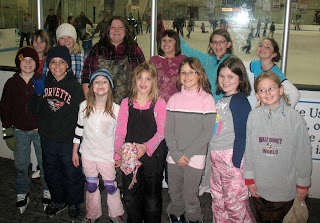 After getting good and tired doing that, there was pizza, and after that there was cake and prize bag opening. 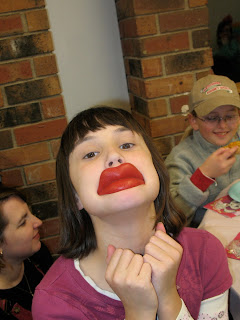 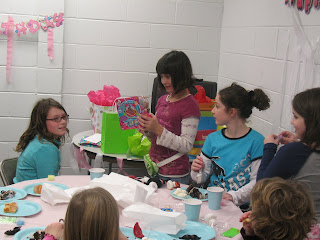 We ended up staying quite some time after the party was officially supposed to break up - these things never end up on time, and fortunately the rink staff wasn't too inclined to shoo us out the door since they had other things going on to keep them busy and they generally seemed to like having birthday parties there - but eventually we packed up and went home.

As it turned out, there were a few extra goodies leftover. We're thinking of changing our last names to "Whiplash." 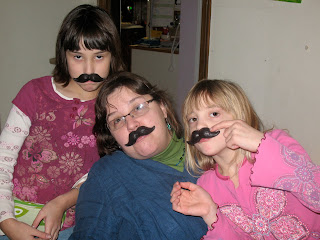