Once again, people, say it with me: if you want trivia you need to go to the source.

Last night, for the second year in a row, the team from Home Campus went down to the local symphony orchestra's fundraising team trivia contest and walked away victorious. I wasn't the captain this year, which was a nice break, but in terms of personnel it was more or less the same group as last time. The Dean doesn't really care if we win, so long as we beat Local Tech and Nearby Private College. In theory we could place third to last and accomplish that goal, but in practice we have to win.

Academia is where the term "trivia" arose, and academics are its greatest practitioners. There were teams there from banks, corporations, libraries and charitable groups, but we are the Greatest of the Least, the Masters of all that is not really worth mastering, and you know what? It feels good. 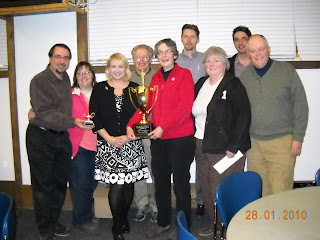 My favorite observation of the night, to be filed under the "How UberGeeky Are They, Really?":

The question was: which five countries in the world have one-syllable names?

We dug right into that one, came up with our five and then had doubts. So we sent Dave M up to the podium to ask for clarification: Must the names be in English, or in the language(s) native to that country?

My lord, it's no wonder we won.