A Christmas Story, Part III: Christmas Day and Beyond

Don't mess with Santa - dude's got better intelligence than the CIA, though after the debacles of the last administration that might not be saying much. Apparently finding four kids who had left their homes in Wisconsin and New York to wake up Christmas morning in Tennessee was something well within his powers, however.

We have got to get this guy on the payroll in Washington.

Christmas morning came bright and warm in Chattanooga, and for the first Christmas ever the girls were up before we were. This was probably because a) the girls went to bed at normal time but we were up late, and b) they were sleeping in the same room as their NYC cousins, whose schedule is shifted rather earlier than Tabitha and Lauren's schedule.

But if you can't wake up early on Christmas morning, when can you?

There was a great pile of loot waiting downstairs, and a good time was had by all - some by opening gifts, and others by watching the opening of gifts. And since there were four kids, this meant that there were all sort of opportunities for borrowing and playing with and generally sharing. 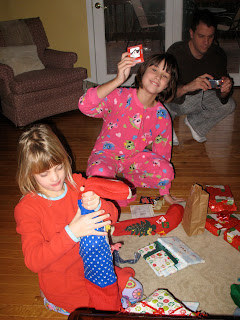 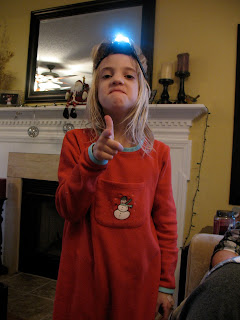 Some of the most popular things were toys that would not have been out of place when I was their age - a Rock-em-Sock-em Robot game that got a lot of rocks and socks all morning, and a pair of balsa-wood gliders that spent the rest of the weekend randomly sailing around populated areas and gradually growing less airworthy through the repeated application of scotch-tape for repairs. Eventually it was like throwing a baseball, but somewhere under there was still a glider and so the fun never quite ended. 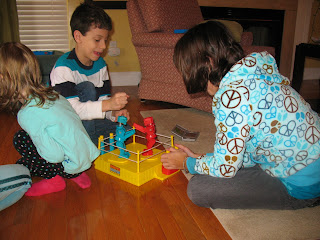 We spent the remainder of our time in Chattanooga hanging out with family and finding new ways to keep ourselves entertained. Can't go wrong either way, really. 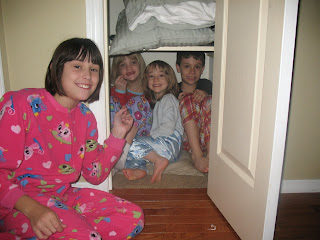 Well, maybe you can.

The day after Christmas, having all been soundly thrashed by four-year-old Sara in the Wii version of the game, we decided to go bowling for real.

Now, I hear you laughing out there - but you know, bowling is a great way to hang out and be entertained, particularly when the ball-to-person weight ratio approaches unity. Plus, when you have that many giant balls around, the puns fly fast and thick and you have to appreciate the inventiveness required for such things when there are small children around. It's an art, really it is. 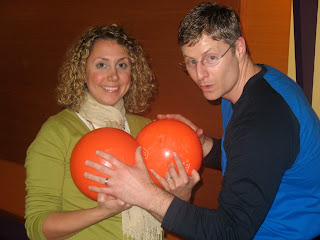 And when all else fails, you've got sufficient downtime between turns to come up with new games. 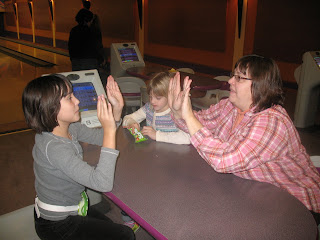 We went to see the new Disney movie, The Princess and the Frog. Of course we did. It had small talking animals in it - how could we not? And you know, it was pretty good - it had great animation, a decent story, and enough New Orleans music to justify the cost of admission on that ground alone.

One of the Uncles Chris - the tall one - also taught us how to play 31, so now we have a new card game to add to our repertoire. It is the perfect card game - it's fast, easy to learn, complicated enough to be interesting and mindless enough to allow drinking and socializing. What more could you want? We played several times, and I think I broke even since I won a round and that more or less covered my losses.

On our last night in Chattanooga we gathered together for Birthday Cake! Mostly this was for Tabitha, but I got to piggy-back onto that action too. The only problem with that was that it increased the total candle volume to "conflagration" status, me being considerably older than Tabitha. 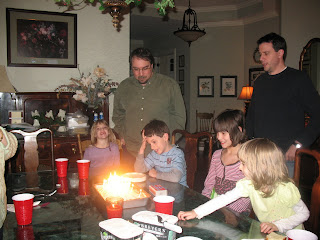 But with all the hot air this teacher can blow, extinguishing the blaze was not a problem. I knew those lesson plans would come in handy some day.

The cake was also an effective way to coerce the various children into a group picture. There was much milling around and unproductive shooing until Kim announced "All kids who want cake, gather for a picture!" 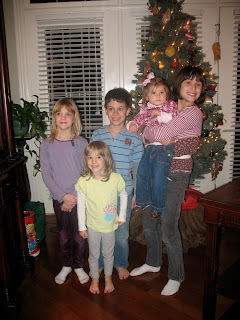 I would NEVER laugh about bowling. When my mother teases my stepfather about where she met him, he reminds her that SHE was there, too.