Christmas has finally come to an end around here, which is only fair since it is nearly Groundhog Day.

In the grand family tradition of celebrating holidays when people can get together - since, really, what else is the point? - we went up to Kim's parents' house today for our Ukrainian Christmas celebration. In some sense it's a lot like the Italian version, only with different starches and soups. Both involve as large a family as you can gather together and as big a meal as you can feed them, and that's not a bad day.

So there was borscht and stuffed cabbage and pierogies and sausages and we all gathered 'round the dinner table and were glad in it.

Of course the fact that we were doing this in late January, almost a month to the day after the Christmas date on the calendar, did not mean that we were prepared for it. No, we stopped on the way up to get our last gifts and wrapped them up there, because it's just not Christmas unless you're doing things at the last minute. I've never understood people who get their shopping done by Labor Day. Fortunately I am not likely to become one of them anytime soon.

After dinner we had the traditional exchange of presents, mostly focused on the various grandchildren that were about - Tabitha and Lauren on our end, plus their cousins Kegan, Brody and Marin. The only adults who got presents during this were Grandma and Grandpa, mostly because Tabby and Lauren wanted to get Grandma a leopard-print Snuggie, although by the time we were packing up the car to come home we somehow ended up with it. Apparently we traded a pink one for it, because it is the Year of the Snuggie on this side of the family too and the things are just everywhere. Whoever invented it is doing quite well from a product that is essentially a bathrobe worn backwards. But it's warm and snug and now we have three of them so one of us will just have to rough it. It will probably be me, since I tend to stay warmer than the rest of my family, and that's fine. I'd probably just trip over it and break something - most likely me - if I wore one. 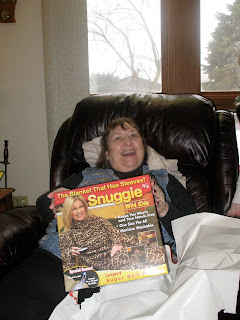 It was also the year of the Lava Lamp.

The grownups all play the same Cousins Gift Swap game that we played down in Tennessee, and somehow, without consultation or planning, two different people brought pink and purple lava lamps to throw into the mix. And somehow, not naming names of responsible parties (**coughLaurenTabithacough**) I ended up with both of them, just as I ended up with two blue Snuggies in Tennessee for the same reasons. We'll have to set them up somewhere, and then won't we be mod? 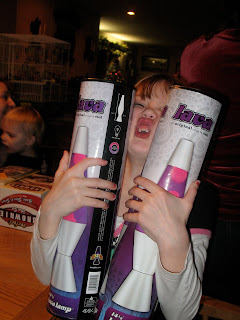 It was a foggy trip home but we made it back without changing the shape of anything on the road and that is always a victory.

Merry Christmas to all, and to all, finally, a good night.
Posted by David at 1:28 AM

Ha,ha. Veeeeerrrrrrrrrryyyyy funny. I'm commenting on (**coughTabithaLaurencough**). The picture was nice to.