Lose One for the Gipper

It was a tough weekend for the good guys. 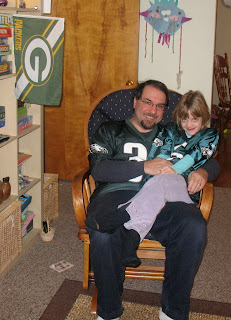 The first weekend of football playoffs was just fraught with intrigue around here, since - as shown above - we have some divided loyalties. Both the Packers and the Eagles were playing, and if everything fell out correctly there was the distant chance of them meeting in the NFC championship game. This would have caused Issues, not to mention Consternation and possibly Marital Strife, though since neither Kim nor I ever really expects our team to win it probably wouldn't have been all that bad.

And in any event, it was largely a moot point by the time we went to bed on Sunday.

The Eagles, as noted, went down in flames on Saturday - destroyed by the Evil Empire of Football. When we were out Saturday night with our friends Dan and Theresa, Theresa asked me "Why do you hate the Cowboys so much?", a question roughly equivalent in my mind to "Why do you keep breathing air?" It's just what you do; it comes naturally and it is Meet, Good and Just. The Cowboys don't ever have to win another game on my account. Yet they insist on doing so anyway, often at the expense of the Eagles. Kim and I were going to have dessert at the local sports bar and watch the rest of the game after Avatar let out, but when we saw how bad the score was we just went home.

At least the Packers put up a fight.

And what a fight it was - down 17-0 after the first thirty seconds or so, they came back to force overtime in a game that had more than double the number of points in the over/under line, and then lost it on a spectacular play by an opposing defense that might as well not have played the previous three quarters.

And so all the storylines collapsed, Schroedinger's Cat met a gruesome end, and the rest of the playoffs are even more devoid of meaning than they were to start with (hey - one of the great things about professional sports is precisely the fact that at the end of the day they don't really matter). There will be no Packers/Eagles championship game. Brett Favre and the Vikings will have to do whatever they do without input from his old team across the Mississippi River. The Cowboys will continue playing.

At least the Patriots are done too.
Posted by David at 10:21 PM

Hey, don't mess with my Patriots. I spent a long time putting up with agony and despair of ever winning a game when I was a child...they may look like overpaid bullies now, but I remember them when they were getting their pants kicked clear off of them every week. *Those* are the Pats I cheer for.

I remember those Patriots. I liked them then - they reminded me of the Eagles.

I tell you what - when those Patriots come back, I'll cheer for them again.