It was Prom Night here in Our Little Town this weekend.

I always like Prom Night, even though at my age all it means to me in practical terms is that every restaurant in town is full with teenagers in all their finery, keeping me from my well-deserved meal after a long day at the Cat Show.  I am older now, and Proms are not meant for me anymore.

I wasn’t always this old, though.

I went to my Senior Prom, back in high school.  For many of my college and graduate school friends this marked me as even more uncool than they had originally thought – there is a certain nerd-chic anti-cool that says if you go to the Prom then you have somehow Sold Out and might as well paint minivan advertisements on your butt – but I had a wonderful time and I’ve always been glad I went.

I went with Jenny, who was my girlfriend that year.  She wore a pinkish-mauve dress with all sorts of frills on it – this was long before it became fashionable for girls to wear slinky cocktail dresses.  It was a different age, and it worked for us.  I, of course, wore the standard rented tuxedo.  Jenny absolutely refused to let me wear tails, which I thought would be dashing and which she found ridiculous.

I eventually did get to wear tails at my wedding and I was in fact dashing, I must say.  Or at least Kim let me think so, which is yet one more reason I was happy that day.

Jenny and I stood for innumerable pictures, in her yard and mine, and then we were off.

They held it at a hotel in center city Philadelphia, which meant we had to drive down – an act of bravery on the part of my parents, letting us take the vast old Pontiac into the city that way.  We drove down with another couple – Gerald and his date, whose name I no longer recall.

I don’t remember much of the event itself, really.  We sat at a table with some friends.  I’m sure Jenny talked me into dancing at least once – every woman I’ve ever dated more than a month has had that struggle, and most eventually succeed in getting me out there.  I do remember that someone stole her purse, which contained in total one item of makeup and one exposed roll of film.  This is why I don’t have many pictures of the Prom itself, I suppose.

What I remember most is are the things that happened afterward.

We got trapped behind the stricken car of a hotel guest as we were leaving the parking lot.  I eventually just got tired of waiting, jumped out and – tuxedo and all – helped them push the car out of the way, for which the parking attendant let me go without paying.

We stopped at the convenience store on the way back to the suburbs so that Gerald and I could dash in and buy snacks.  The clerk was a bit taken aback by the tuxedos, but she rallied and managed to sell us our junk food without laughing too much at the absurdity of it all.

And finally we headed over to Nadja’s, where a bunch of us – Nadja and Seth; Jill and Tom; Tiz and Bill; Lan and Alex; Gerald and his date; Jenny and me – basically just hung out into the wee hours, telling stories and eating snacks, until we were all ready to collapse. 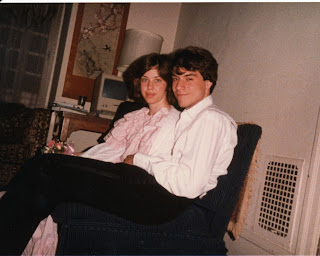 I have always loved this picture.  It’s about 3am at Nadja’s, and Jenny and I are pretty much toast.  But happy toast.  We were young, and what the world had in store for us neither of us knew or thought much about.

I think about that, whenever I see the teenagers out on Prom Night these days.

Go hang out with your friends, I say to them under my breath.  Dance once or twice, even if it’s not your thing – if nothing else, your date will appreciate it.  Help people if you can.  And don’t worry too much about what’s coming, because you have no idea what it is or how it will change things.  You don’t.  Eventually you too will be just another family guy happily out with his wife and kids, looking at the teenagers, wondering how he got so old, and not regretting any of it.

A sweet story and a great picture.

Wow, that really IS you! Yup, great story.