But Why A Duck?

When I was young, I had a relative named Zaduck. 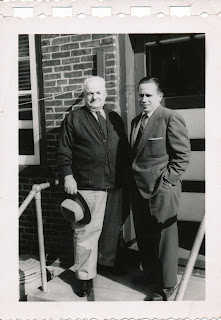 I’m pretty sure that’s him, on the left in that photo, with my grandfather on the right.  It’s 1949, somewhere in South Philadelphia, where all the Italians in the city lived at the time.  I never lived there, but it’s my semi-ancestral homeland nonetheless, I suppose.

As with most of these photos, I really don’t know what the occasion was for this one.  That’s one of the things that is hardest about this scanning project to explain to my own children.  Digital natives, my daughters have grown up in a world where every conceivable device – from telephones to computers to music players – comes with a camera embedded in it.  For them to go through a day without either being photographed or themselves taking a photograph is odd – everything in their lives is recorded.

Photographs used to involve bulky, heavy cameras.  Those cameras used expensive, fragile film.  That film had to be sent away to be processed, something that often took weeks.  You took pictures at events.  It was a special thing to be in a photograph.

So clearly they were doing something of note.

I don’t believe I ever met Zaduck, or if I did I was very, very young at the time.  I have no memory of him other than his name.

Such a glorious name, though, Zaduck.  The accent was on the last syllable: Za-DUCK.  I always thought that was marvelously funny.

It was years before I figured out that his actual name was Rocco.

He was my grandfather’s uncle, I think.  They shared a first name, though my grandfather never used it - he always went by his middle name, Antonio, anglicized to Anthony and shortened to Tony.  This was because when my grandfather was a boy his mother didn’t like the way Americans pronounced “Rocco.”  She thought it sounded like “Rags.”  Nobody was going to call her son “Rags.”

Italians in the US had a tendency to cut off the final syllable of words and punch the last remaining syllable.  I remember learning that in a linguistics class in college and thinking, oh, right, that certainly explains a lot, yes it does.

Shift the “r” to a “d” – which comes pretty naturally once you’ve gotten this far; try it yourself and see – and you get Zaduck.

Now that I am older, I know that I once had a relative named Zio Rocco.  But when I was young, he was Zaduck.
Posted by David at 10:06 PM

As I'm doing a lot of scanning myself, I'm learning most people write little or nothing on the back of the photos to identify the people, time, and place. This makes trying to identify and label scanned images "interesting".

Most people, but not me - for that very reason, my own photographs are compulsively labeled on the back: date, event, who's in it, and so on.

But the reason I do this is because you are right - most people don't.

One of the reasons for this project is that there are still people around who can fill in those gaps now. So with any luck, I'll know more soon.

An identification for your labeling - Zio Rocco was Pop's uncle, his mom's brother. In Zio Rocco's younger days, he was also known as "El Rosso" or whatever the spelling is for the Italian word "Red" because of his carrot-top red hair. Have no idea what the occasion was in this picture, but don't they look spiffy!
Mom