The city has stolen my street.

After the Great Driveway Robbery of a few weeks ago, things calmed down in front of the family manse for a while.  The neighbors a block north of us could not say that, and for a while it felt like we were living in some gravelly version of On the Beach, staring northward at the destruction that was inevitably drifting toward us and wondering how much longer we had before then.

It was almost enough to make me go out and buy cognac and start racing cars, except that if you looked south the world was still normal.  When will I ever say that again, I wonder.

But yesterday promptly at 7am the Big Yellow Machines ventured beyond the cross street and began stripping the asphalt from in front of the neighbor’s house and working their way with all dispatch toward us.  And those machines can move with surprising dispatch, really.  It took some negotiations, but they eventually did let us out so we could get to our appointed places and start our days.

And when we came back that evening?  No street.  No curbs.  No driveway aprons. 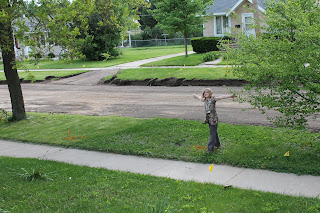 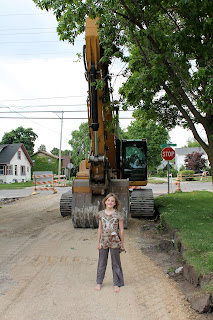 Today it became apparent that stripping back the surface layer was just prelude.  Again, promptly at 7am (say what you will, but they are mighty prompt) the Big Yellow Machines began delving even deeper into the earth, and eventually I expect them to crack open some ancient something and release demons into the air – cranky demons who have been stuck in the Vessel Of Everlasting Containment with nothing to do but six old crossword puzzles that they memorized eons ago.  They will be annoyed.  They will take it out on us.  They will destroy whatever they touch and rule over the ruins.

And Governor Teabagger will sue them for copyright infringement.

So if there happens to be an unusually lengthy gap between posts, please contact an impossibly handsome bush pilot and his nubile yet brilliant assistant (played by A-list stars seeking a break from critical acclaim and looking for a payout) and have them airdrop copies of the last six years’ worth of New York Times Sunday crossword puzzles.