For Those Who Served

It occurs to me that since it is Memorial Day, I should post some of the photos of people in my family who have served in the military.

I’m not one of them.  I remember being somewhat surprised in high school to discover that this was not actually required of me, and how quickly that surprise morphed into gratitude.  I’m exactly the kind of sarcastic misfit who would end up court-martialed by week three of basic training for answering questions honestly and in exquisite detail when everyone involved – including me – understood that the proper answer was “Yes, sir!” or “No, sir!” without any further additions.

So I’ve always been glad that I had the option to remain in civilian life, and thankful to those who made that possible.

This picture is probably from 1945, at the end of WWII. If I’m not mistaken, that’s the Arc de Triomphe there in the background, so Paris must have been liberated by then.  Clearly the Germans were no longer a problem, at any rate.  The guy on the left is my Great-Uncle John – my grandmother’s brother – who spent his entire working life in the Army.

This is a more formal portrait of him. 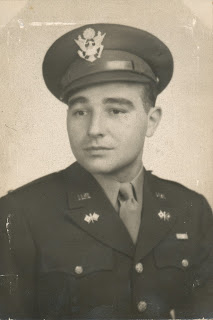 I never got many stories about John, though the one that I did always amused me.  Sometime well after the war his job became infiltrating US bases to test their security.  He’d walk into the place in full uniform – not a difficult task for any even semi-competent spy, really – say hello, chat with people, and walk out with as many confidential documents as he could grab.  Family lore has it that he was never caught.

[UPDATE 5/29/12:  A conversation with my mom revealed that it was not my Great Uncle John who was the security tester - that was a family friend.  Oh well.  It was a great story anyway.  She also said that he was stationed all over the world during his time in the Army - from Taiwan to Germany - and retired as a Lt. Colonel.  He briefly worked for Pan Am after that before passing away fairly young.] 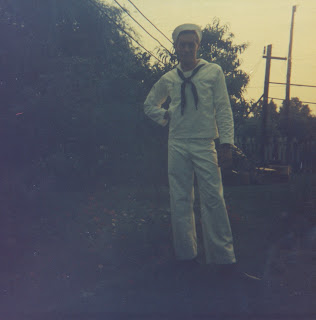 He signed up during the Eisenhower Recession of the late 1950s and ended up serving as a radioman on a repair ship – an ungainly WWII-era ship that served in every war the US Navy was deployed to in the three decades after it was built and was eventually sold to Taiwan in the 1970s.  For his term of enlistment the ship stayed pretty much on the East Coast of the United States, though they did get to Cuba for a visit – he took a number of photographs that, unfortunately, were damaged by being stuck together in a pile for years.  By the time the ship returned to take part in the blockade during the Cuban Missile Crisis, I think my dad was back in civilian life.

Every once in a while he will tell stories from his days in the service.  The only time he saw the northern lights, for example, was aboard that ship.  On a practical level, his Navy service endowed my father with an ability to fall asleep instantly in any position, a skill he retains to this day. 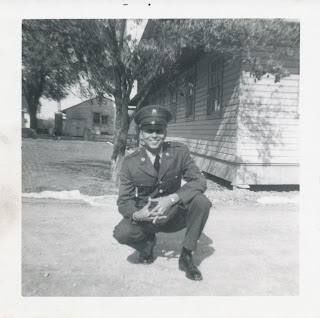 I know even less about his service than I do my dad’s and my great-uncle’s.  I know he was discharged in 1964.  This was before Vietnam was all that much of a deal, so I don’t think he served there.  I suppose I will have to ask him about it.

After he was discharged he came back to Philadelphia and took a number of photographs to celebrate his newly “unemployed” status (seriously – that’s what it says on the back of one).  This one is with his grandmother, my great-grandmother. 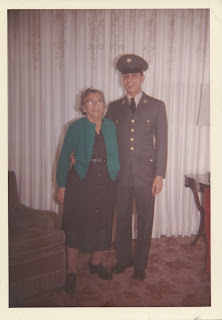 Every Memorial Day we are urged to remember those who served, and this is a good thing.  All too often, though, they become a faceless blur.  It is always good to remember the people behind it all, in their specific individuality.

Great photos. Did you know that in the north of Loraine they are finding on a regular basis unexploded ammunition from WWI?

I'm not surprised. At Ypres the Central Powers and the Entente Powers fired around 1000 shells for every square meter of ground.