Today was Recital Day here in Our Little Town!

Every year, the musician who teaches Tabitha and Lauren violin and piano, respectively, gathers all of her students together into one place, asks us parents to bring goodies, and puts on a recital.  We’ve been doing this for several years now, and it’s always a lot of fun.

There is also the traditional struggle over what Lauren is to wear, which ends with her well dressed but not especially pleased about it, and this indeed was the case this year.  Next year we have resolved to move this part of the event to the night before rather than wait until it is time to go, the better to enjoy its many-splendored nuances.

The girls were early in the program this year, which was nice.

First up was Lauren, whose negotiation skills were clearly in evident by the Stone Age vest that she wore over her pretty blue dress.  Hey – you give some, you get some.  She marched up to the piano and launched into her two songs and did a very nice job of them.

And why not?  She’s been practicing for a while now and had learned them well, even the one that for some reason required her to cross her arms and play that way for several measures.  She later said that she was so nervous she was shaking, but you couldn’t tell from where we were sitting, and that is the key to performances anyway. 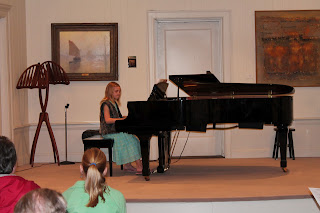 She did well with her piece also, despite getting lost in the middle for a bit.  But the most useful skill you can learn in life is how to pick yourself up from a mistake and move forward, and she did that with grace and aplomb and finished strong. 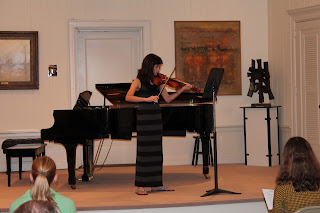 Afterward there were several layers of goodies and cauldrons of punch, and life was good.

I know exactly that stomach churning moment when your sprog gets up on the stage. Which of her personalities is going to show up, the professional or the putz?

Have you suggested duets to the teacher? Let me be clear, that adds a lot more parental stress to the occasion, especially since they have to practice together for a week or so beforehand. That can strengthen the sibling bond ... or not. :D

But in our case it has been positive. They learn the addional art of listening to a musical partner, and they have a joint accomplishment to be proud of, without rivalry.

We did get their performances on video, but I have no idea how to get that video a) off the camera and onto my computer and then b) off my computer and into Blogger, particularly now that Blogger has c) optimized its interface so that I can barely figure out how to get photos to post.

We've suggested duets to the girls, who have both soundly rejected the idea so far. But someday perhaps they will change their minds.

I did get to do a duet with Lauren one year, and it was fun.

I'm just astonished that they know what "putz" means. We live in an area of the country that is sorely Yiddish-deprived.

We have orthodox Jews who sometimes attend our Baptist Sunday school, which wold probably blow the minds of your more narrowly religious Midwestern neighbors.

I grew up in an area where the public schools got Rosh Hashana and Yom Kippur off. I miss the sounds of it.