And so the photography project keeps chugging along.

Part of the problem, of course, is that I get sidetracked by the pictures themselves, because really what else can you expect?  I end up wondering about how things ended up in just that configuration, and what happened right after the photo was taken.  I suppose this is one of the dangers of being a historian – you want to know the rest of the story.

Take this picture, for instance: 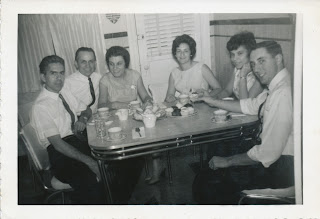 It’s 1963, in the kitchen of my grandparents’ house on Willows Avenue.  It’s a party, because my uncle has just graduated from college.  All parties end up in the kitchen eventually.  My uncle is off in another room somewhere being sociable, perhaps – he shows up in some of the other photos doing that – or maybe he took this photo himself.

My grandparents are the second and third people from the left.  The two on the right are my parents.  They’d been married about a month when this was taken.  In between is a family friend named Annie, and I don’t know who the person on the far left is.  It was a party.  People drifted around.  There is good food on the table and good company around it, and it looks like everyone is enjoying the moment.

There is a story in this photograph, an evening spent together, an achievement celebrated among family and friends.

How can you not get sidetracked by such things?
Posted by David at 10:03 PM

The fellow on the left is Annie's husband, always called "Bell" because his last name was Beltrante. His first name was Orlando, something I wasn't aware of till I was in my teens. Orlando Bloom was nowhere in sight then, so Orlando seemed too "old country" to first generation Americans. Bell once sent the last page of a book he was reading to the publisher because he said the story just couldn't have ended there, and would they send him the rest of the book. Bell was something of a character right up until Annie (Nana's cousin and your Uncle Bob's and my frequent baby sitter) divorced him sometime in the 70s.

Bell once sent the last page of a book he was reading to the publisher because he said the story just couldn't have ended there, and would they send him the rest of the book.

I'll bet somewhere in a publishing house in NYC they still have Bell's letter. It's probably framed.