Please All, And It Will Be A Good Day

It was a theatrical day here in the nation’s tender midsection!

Today was the annual 4H Drama Festival, which is held down at Home Campus.  Every year eight to twelve 4H clubs rehearse a play of their own choosing – one that they can set up, perform and strike in less than 25 minutes – and it put it on in a daylong event complete with judges, because no 4H event, not even lunch, is complete without judges.  This is the second year our troop has participated, which is not all that bad considering it is the second year our troop has existed.

Fortunately, we have some good leaders in this group.  Jamie – who is an honest-to-Pete published author of children’s books – has written our plays and does most of the directing.  Kim stands in as the assistant director.  And since I am both the Performing Arts Coordinator at Home Campus (and thus the guy with the keys) and a theater techie of long standing, I end up managing that part of it.

The goal of these things is to get as much of the action into the hands of the kids as possible, though, so we try to step back and let them do their things.

This year’s play was a version of Aesop’s fable about the donkey and his owners, the one whose moral is “Please all and ye shall please none,” which Jamie adapted for a 4H theme.  Basically the play starts with a painter who responds to outside criticism exactly that way, after which a storyteller spins that tale and lessons are learned.  It worked for us.

We had a floating cast of about 15-20 kids ranging in age from kindergarten to high school, and all of them had at least one line.  The littlest ones can be really cute, up there on stage.  Well, they all can, I suppose.  That’s the fun of this sort of thing.

They’ve been rehearsing for weeks now, and it all came together today.

Lauren actually ended up with two distinct roles.  In her first appearance, she was one of the passing children who criticize the artist. 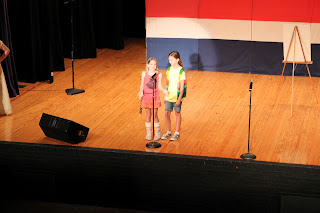 After that, she was the daughter in the original Aesop tale.  She did a marvelous job, projecting her voice and demonstrating great comic skill.  She likes being on stage and it shows. 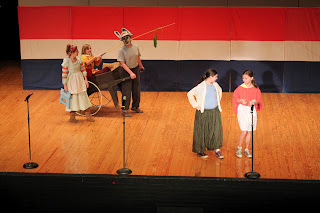 The spotlight you see was provided by Tabitha, who was the only kid who showed any interest in tech work.  Unlike last year there really weren’t any obvious points for lighting cues, so we decided that there is always room for a spotlight somewhere.  Spotlights are fun.  She did a very nice job, even with some late-added cues that the organizers asked her to throw in for when the emcees were making announcements. 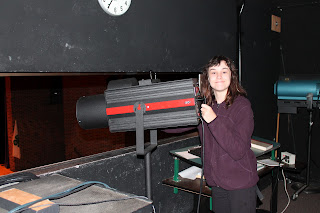 And then, just like that, it was over.  That’s the thing about theater – you work so long, and then it’s over. 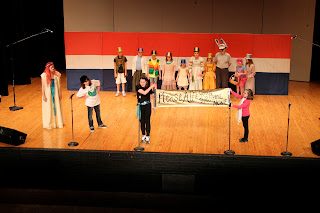 Afterward they had us gather in the judging room, where the judges explained what they liked about the performance (most of it) and what they thought needed improvement (there’s always something).  In the end, they awarded our players blue ribbons for being in the top category of the Drama Festival. 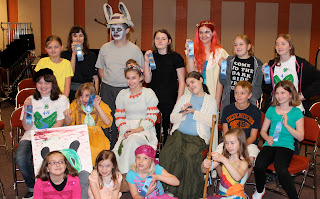 Nice work, Players! Your club (and parents) are very proud of you!