The End of the Holidays

Christmas is finally over.

Not that I was in any hurry to see it go. A holiday dedicated to the notion that there is a higher power out there that wants us to be nice to one another for a change is a holiday I can get behind. Plus it involves good food and company, peace and loved ones, and really – it just keeps getting better. 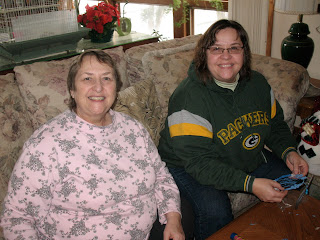 Our last round of Christmas was up at Kim’s parents’ house, a little north of Our Little Town. Various and sundry bits of that side of the extended family gathered together around the green-and-gold glow of the Packer game to celebrate with vast quantities of Ukrainian food, which is a somewhat different form of carbohydrate than the Italian food I grew up with. 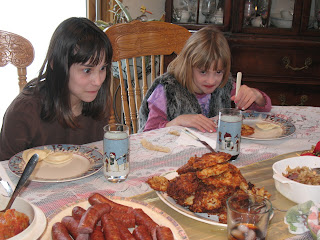 There were a few gifts for the kids – most of that had already been taken care of last month – and the adults played the dice game that we now substitute for the traditional festival of materialism, not that there’s anything wrong with gifts, but at this point we can just get what we want, so we aim for fun rather than stuff. 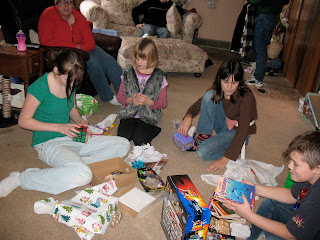 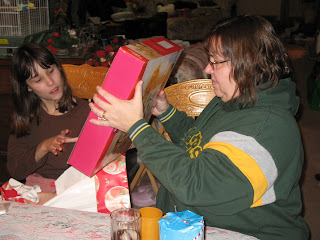 Last year was the year of the lava lamp. This year: housewares. Somehow I missed out on the electric teakettle, the griddle, the bread dish and the warming tray, which was just fine as I’m not sure what I’d do with all but the first and I already have a teakettle. I ended up with a nightlight that the girls immediately claimed (not least because it was shaped as – wait for it – a lava lamp) and an Ove-Glove, which was one of the things we’d brought for the game, so it was like homecoming.

I always consider it a victory if the things I come home with are small.

The kids spent most of the evening running around and finding new ways to put things in places other than where they started. The adults talked and watched football. There was much rejoicing about the Packers’ decisive victory over the Atlanta Falcons.

And the local announcers waited until the post-game show to trot out the “General Sherman” references, which was mighty restrained of them. Because there’s nothing like the destruction of a major American city except a lopsided football game. I could see how they’d get confused.

We got home around midnight and poured ourselves into bed like day-old coffee, and thus to the holidays come to an end for another year.

The girls look a little, um, wild eyed in that photo.

If they subsequently burst into maniacal laughter, I'm leaving the country.

rentamp = what you need to power your lava lamp

Hey - the food was good!

I'm doing my best to train them in the Evil Laugh, btw. Lauren's classmates know me for that now, and every time I go have lunch with her down at Not Bad President Elementary, I spend a lot of time doing that.

We all have our roles in life.

I'm glad the holiday ends with a day dedicated to feeding the family together. Next year - a bigger table!