This One Goes Up to Eleven

It was Tabitha’s birthday, just before the old year ended. We celebrated in fine style.

Tabitha was the last baby born in Our Little Town before the end of the 1900s, which means that every year she has to wait until the last possible day to celebrate her birthday – until dinnertime, if she wants to be technical about it, which she rarely ever does because she’s waited that long already and there’s a powerful lot of anticipation already built up inside of her by that point and it’s kind of like an overstuffed Thanksgiving turkey that you don’t want to prod unnecessarily or else you will end up having all kinds of delicious, delicious anticipation covering the walls and hanging off your nose.

I’ll pause to let that mental image sink in.

She’s reached the point now where she prefers to have her actual party sometime in January, since most of her friends are otherwise occupied on New Year’s Eve these days, so Tabitha’s actual birthday is generally something spent with family. She gets to choose the dinner menu and style of cake – chicken, egg noodles and peas this year, plus a marble cake that she frosted herself with buttercream frosting of her own manufacture – and we make a quiet evening of it. This year her friend Grace was over, which made it all that much more fun. 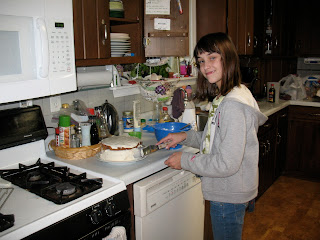 Most years Tabitha does not make the mistake of letting Lauren put the candles on the cake. Lauren is a very enthusiastic candle-putter, and unless Tabitha is already a college graduate I’m guessing that there were a few more candles on that cake than were strictly called for.

It made a lovely light. 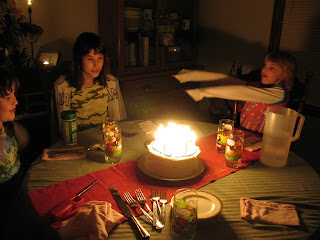 And a fair amount of smoke. 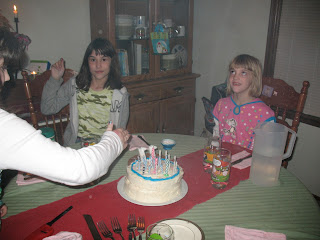 There was then the first round of birthday presents. We seem to have crossed one of those divides where most of the presents were clothing and gladly received. They grow up so quickly. 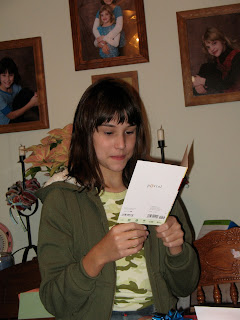