A Fine Afternoon For A Soiree

In keeping with our family tradition of celebrating holidays whenever there is time to do so, we had Tabitha’s birthday party this afternoon. It was a fine time. You should have been there.

This was a big birthday party, all things considered. In addition to Tabitha and Lauren there were eight other girls in attendance. This meant a couple of things.

First, it meant that the decibel level in our house was enough to dent the sheetrock. The hamsters were vibrating, the cats ran outside into the 5-degree windchill rather than deal with it, and car alarms three blocks away had to be disarmed. And that, my friends, is how you know you’ve got a party.

Second, it means that there were flustered whispers of boys. Tabitha is now in 5th grade, and even if she plays her cards close to the vest on this issue, not all of her friends choose to do so. You can learn a lot just by listening.

And third, well, there really is no third. It was a good time, and that is all that it needed to be.

Mostly the girls wanted to be left alone to do their thing, which Kim and I were glad to do since figuring out activities for a horde of pre-teen girls is not something we’re really overqualified to do. But we do serve a purpose at these things, mostly by serving food.

It was Build-Your-Own Tortilla Pizza Day here at Chez Us! We set out a stack of tortillas, two bottles of pizza sauce and more bowls full of toppings than you can find at your local pizza shack and let them go to town. 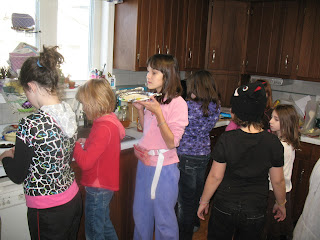 Locusts, the lot of them.

And then it was cake time! 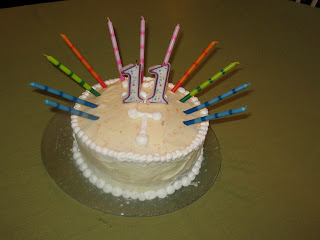 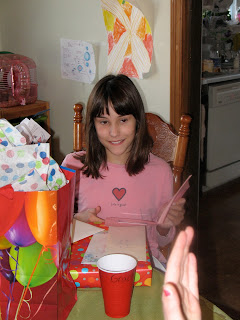 And then, because it is Wisconsin and because nobody in Wisconsin blinks an eye at the thought of taking children to play outdoors in 5-degree windchill, we stuffed the lot of them into our cars and went down to the outdoor ice rink that Our Little Town operates down by the river. 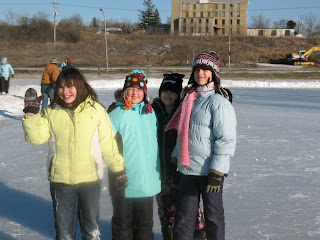 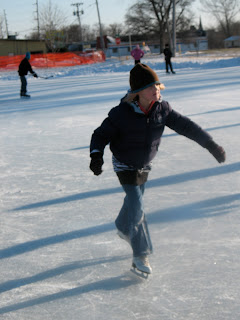 Afterward there was cocoa, because afterward there must always be cocoa. There’s probably a law about that somewhere. It is a good law.
Posted by David at 8:33 PM