Molly Ivins used to say that some days were like finding Fidel Castro in your refrigerator. Hard to know what to think.

It’s been cold here in Baja Canada, as it usually is during wintertime, and this means that the girls have been spending most of their leisure time indoors. They read, play games, plink around on the computers, and generally find ways to keep themselves occupied. They’ve reached the age where we don’t really have to monitor them much unless there is wailing and gnashing of teeth, so there are long stretches of time where they’re pretty much filling up their afternoons with activities of their own devising.

Which is why, the other day, I came out of my office and found myself staring at this: 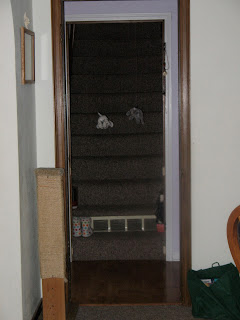 They call this game “Bungini.” It seems to involve two small stuffed animals being tied by elastic strings to the stair rail above and being sent off to bounce up and down. It entertained them for hours on Sunday.

But the girls have decided that the Bungini animals enjoy just dangling there in the stairwell, and so they have taken to leaving them there.

It makes the place look like a gibbet.  Every time I turn a corner and see them there, I wonder what crimes those adorable little stuffed animals committed to get them to that spot.  You can't trust anyone, it seems.

I’ve kind of gotten used to this over the last couple of days, but still. It does give one pause.

Hard to know what to think, some days.
Posted by David at 1:50 PM