Playoff Fever! An Aspirin Will Help

We are a house divided.

No, not in the usual ways. Politically Kim and I tend to line up on the same side most of the time. We were each raised in a different variant of Christianity from which we have in formal ways somewhat drifted but which continues to form the basis of our own religious views. We have similar parenting philosophies. We like spicy food.

But she is a Packers fan and I grew up with the Eagles. 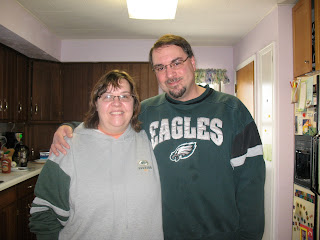 Normally this is not a problem. The two teams only play against each other during the regular season every few years, so most of the time we can cheer for our own team and the other team as well. And over the last decade or two the two teams have generally not been good at the same time, which means that most post-seasons are conflict-free as well.

Every so often, though, the stars and talents align and the Packers and the Eagles meet in the playoffs, the way they will this afternoon. And that just makes for tension.

The last time this happened was in 2004, when the Eagles beat the Packers in Philadelphia in overtime. Deep in their own territory, with time running out and facing fourth down and a quarter of the field to go, the Eagles somehow managed to survive, tie the game and advance to the next round. Sometimes I get flak from Packers fans these days, and I find that “Yeah, yeah, 4th and 26 to you too” is still an effective response.

The tension we have here at home is not what you’d think though. Neither one of us really believes our team will ever win anything, so we go into this each convinced that the other will be happier at the end of the day. While this is good for a marriage, it is bad for one’s self-image, this constant support of a losing cause. There is nothing particularly ennobling about losing causes.

But this situation does have its advantages.

No matter what happens today, one of us will be happy that our team won and the other will be satisfied that their doom and gloom predictions have come true. And then we can both cheer for whoever advances.

Tabitha refuses to take sides in this, by the way. She has no time for all of these large men chasing after small balls and would prefer to sit in her chair and read about warrior cats. Lauren, on the other hand, has been faithfully wearing her Eagles jersey, even if she did get some gentle ribbing about it at school. She won’t watch the game either, but she’s on my side.

I’ve been wearing my Eagles paraphernalia all week here in Packers country. “You have to rattle people’s cages every now and then,” my dad always told me when I was younger, “otherwise they fall asleep on you.” And so far I’ve gotten some friendly challenges from a few Packers fans (“What do you want, Eagles fan?” I was asked by a cashier the other night) and, much to my surprise, a few supportive responses from local Eagles fans.

What's the aspirin for - the spicy food?

The Packers won, though it was at least a close and exciting game. At this stage of my Eagles fandom, that's all I really ask anymore.