All Hallows, All the Time

We need to spread out our holidays around here.

In addition to the usual holidays that happen in the last 63 days of the year - Halloween, Thanksgiving, Christmas, and New Year's Eve - we also have all four of our birthdays plus Kim and I celebrate our wedding anniversary. It does keep the rest of the year on a relatively sane schedule, but once the leaves turn it is just WHOOSH WHOOSH WHOOSH right through to the new year.

We got our holiday season off right, though, by squeezing both Halloween and another go-round of Lauren's birthday into this weekend.

Saturday was the Official Birthday, as opposed to the party day that we celebrated last week, and Lauren was just buzzing. Seven! Lucky number seven! We had planned to go out to dinner on Sunday as a family birthday party and open family gifts then, but really how much of a chance of success did that plan have? About as much as the Phillies seem to be having, alas.

So there was a brief interlude of happy materialism on Saturday afternoon, as Lauren dove into her family's gifts. She got quite a number of things, most of which have been well played with already - she got a number of "sculptures" from different sources, for example, and has introduced them to all her other sculptures during the nighttime game she and Tabitha sometimes play before bed. 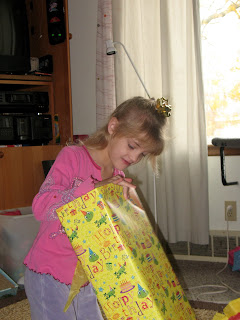 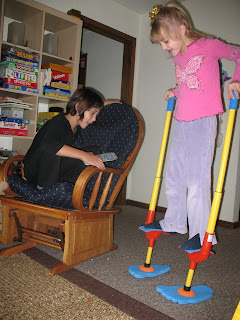 Why we have a television, I do not know.

Partied out temporarily, it was time to get back to Halloween! There were pumpkins to carve!

We let the girls do most of the carving this year, though we handled the big knives and the most stubborn part of the scraping. Carving pumpkins is fun, but every time I get started on it all I can think of is Linus Van Pelt's anguished cry when Lucy first sinks her knife into her pumpkin: "You didn't tell me you were going to kill it!"

But kill them we did. With malice aforethought and pumpkin guts aplenty, much to the joy of the hamsters, who will feast on pumpkin seeds for the rest of the year. 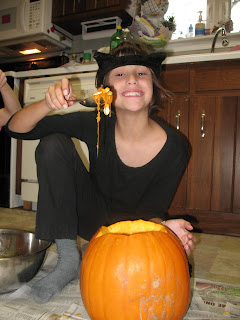 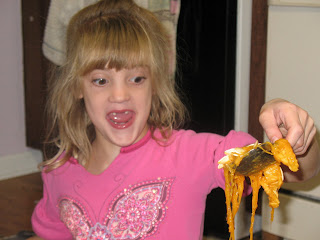 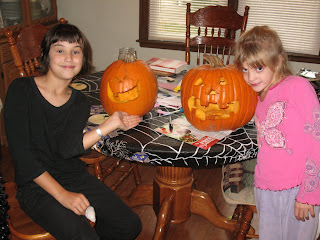 And then it was trick or treating time!

Since there was no Dave O visiting this year to stay home and hand out candy, Kim volunteered to do that and I took the girls out foraging. 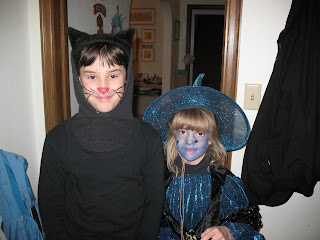 There is something truly odd about marching up to people's houses and demanding candy, and them actually giving it. Odd, but reassuring - there is still generosity in the world. Though I have to admit our traffic was down all around this year - fewer kids stopping by our house, and fewer houses to hit on our neighborhood rounds. Some years are good years around here, with a hundred kids stopping by or more, but some years you're lucky to get half that. Usually that means bad times - the Halloween after 9/11 was rather sparse, for example, and last year during the onset of the Recent Economic Unpleasantness people were also thin on the ground. This year? Maybe the flu. Who knows. But we had a good time anyway, and the girls came back with reasonably full baskets of goodies.

And Tabitha can have the ones with peanuts in them this year, which just excited her no end.

Hang on to your hats, folks - the holiday season has arrived and the roller coaster has left the station.
Posted by David at 12:34 AM