A Day at the Museum

The girls were off from school on Friday, so we decided to cash in some of the furlough time that we are required but not permitted to take and go off to the museum. We'll explain it to the state somehow.

We like museums around here. I ran one for five years, and Tabitha and Lauren still miss the place - I used to take them with me sometimes when I closed up the place for the night, making the backwards loop through the buildings and locking doors behind me. And the Kid's Museum to the south of us is always a big hit, even though they're getting a bit big for the place. A couple summers ago we even spent some time at the Smithsonian, which just floored the girls.

Last August Kim and the girls went to the Milwaukee Public Museum as part of a Girl Scouts field trip, and Tabitha and Lauren have been talking about it ever since. It's the coolest! The fab! Teh Shiny! Made of pure unadulterated awesome, simmering in awesome sauce with awesome-flavored awesome-bits on the side. Naturally, they wanted Dad to see this storehouse of amazements too.

So off we went.

The Milwaukee Public Museum is in some respects a throwback - a mad jumble of haphazardly-explained artifacts, displays and hands-on exhibits that has no particular overarching theme other than being an effort to put as much odd stuff under one roof as possible. It's kind of like a college dorm that way, only without the odor of stale beer. Although this was Milwaukee, so finding that wouldn't have been all that hard, had we wanted to do so.

We elected to pass on that.

The first thing we did was go to the Butterfly Exhibit, which is a good-sized room kept uncomfortably hot and humid and filled with the tamest butterflies in the midwest - the sort of butterflies that will not only land on you if you stand still long enough, but will hit you up for spare change while doing so. The whole room is a whirl of motion, some of it from the insects and the rest from the various denominations of children that flutter about the place more frantically than the butterflies do. 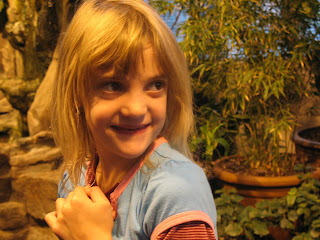 Needless to say this was a highlight.

As was the display of mammoth bones. 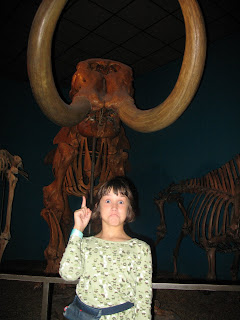 And the large plastic bug. 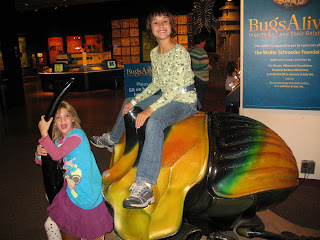 The European village was also quite a thing - a room roughly the size of a lecture hall crammed with huts, each hut decorated in the ethnic style of a specific European nationality from about 1850. Some have cats. You get to this village by passing through the Milwaukee Street Scene from roughly 1900 - where you lose the fifty years I don't know - but you can't get through the Milwaukee Street Scene without hitting up the Old Fashioned Candy Store, where they do indeed sell candy from the 1950s, which is another half century added in somewhere. You have to wait until you leave to eat the candy, however, since there is no candy-eating in the museum.

It's a regular vortex o' culture, indeed it is. Plus Lemonheads.

We cruised through the mummy section, gawped at the Native American displays, and stared in awe at the dinosaur battle that was lovingly recreated for our viewing pleasure by someone with a fascination for reptilian intestines. There was geography and biology, and I enjoyed looking at the 19th-century American coins as well.

If it's old and vaguely anthropological, you'll find it at the Milwaukee Public Museum. Bring the family!
Posted by David at 1:07 AM

And, naturally, on Halloween Eve, we HAD TO SEE THE SHRUNKEN HEADS. Real shrunken heads with real hair and lips sewn shut. Alongside admonitions against ever buying one yourself because that's illegal these days. Lauren whispered in awe the entire time, even asking me to whisper when reading the placards to her.