My brother warned me this would happen.

When Kim and I got engaged, fifteen years ago, the first thing he said after "Congratulations" was, "You know, for the rest of your life, Dubuque will be a romantic place for you." And he was right.

This past weekend Grandma came down to watch the girls while Kim and I revived our tradition of going back to the Richards House, the bed and breakfast in Dubuque where we got engaged. We used to do that every year around this time, but that petered out around the time that Lauren was born and I graduated from Iowa. Between all the things that one does with two small children around the house, and the fact that I no longer had any particular need to go to Iowa any more, the Richards House fell off our radar, which was a shame. It felt good to get back there.

It's a great place, the Richards House. It's a disaster on the outside, due in large part to the prohibitive economics of undoing some of the "improvements" made by previous owners (concrete-based bridge paint on a wooden Victorian house? Really?), but on the inside it is both gorgeous and a little worn around the edges - the sort of place where you can feel right at home. All too often at these places you get the feeling that you're only there to finance somebody's Victorian museum, but this is a place where you can settle in, kick off your shoes, and hang out.

We always try to get the same room that we got the first time - the Blue Room. We light a fire in the fireplace and then, well, we hang out. We got engaged in front of that fire, way back when. This year we did a fair amount of reflecting on things. It's been fifteen years since that first night, and fourteen since we got married, and a lot has happened since then. We're doing well. 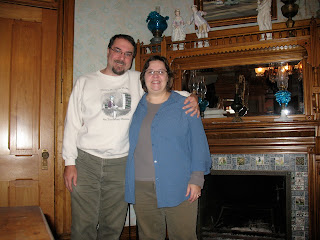 Dinner is always at Mario's, at least on the first night of the weekend, and often on both.

Mario's is a neighborhood Italian restaurant, the kind of place with paper placemats with maps of Italy on the table, where people smoke at the bar and get good and hammered, and where most of the patrons seem to know each other. Mario himself wanders through the dining area from time to time, greeting people in what could conceivably be English if you listen hard enough but which might just as well be in the original Italian.

The first time we went there the waitress patiently listened to us place our orders and then asked, "Is this your first time here?" Yes, we told her, is it that obvious? And then she proceeded to tell us what we should have ordered, at a considerable savings of money to us though quite possibly at the cost of a major artery. Apparently one of the things Mario's is known for is called a "panzerotti," which to me sounds like a sports tank (with racing stripes down the barrel of the gun and a tail fin in the back) but which is actually far more dangerous: imagine a stromboli about the size of your printer, filled with cheese and toppings and then deep fried.

It was good, but not something you want to order too often.

Since then we have moved on to a different dish, one I order almost every time I'm there. It's got feathery fettucini, proscuitto, mushrooms (which I give to Kim) and pecorino romano, all covered in a delicate butter and garlic sauce. Why it is called "Fettucini a la Lumberjack," I do not know. But if you're ever in Dubuque, that's what you need to eat.

Dubuque is really a pretty little city, for those who like such things. It very much looks and feels like the South Side of Pittsburgh, with lots of big old Victorian homes, tiny little shops, and staircases everywhere you look. Nothing is flat in Dubuque. They even have an inclined railway just like in Pittsburgh. We usually spend a day milling around the downtown area, wandering about the shops. This year the railway hadn't closed for the season yet, so we took a ride up and looked down over the whole city. It's a pretty low-key operation, really. You climb into the car, which is about the size of a walk-in closet and sloped at about a 60-degree angle, and you pull the bell-chain to let someone know you're there. The motor hauls your car up and drops the top car down to the bottom, and when you get out you pay the lady at the top. You can wander around the neighborhood at the top of the bluff or just stare out over the Mississippi River, and then you go back down. 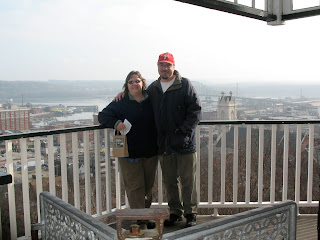 We had a nice lunch at a restaurant that hadn't been there last time we went and eventually worked our way back to the Richards House.

The girls were happy to see us when we got back on Sunday, and we were happy to see them. But it was good to get away for a while, and just spend some time with each other in a place that will always be romantic for us.