My high school class is having its 25th reunion tonight.

Part of me was just not really interested in going, which was good since they're having it in Philadelphia and when you live in Wisconsin that's a long commute for a 3-hour party with a bunch of people you haven't seen since Reagan's first term. And as my dad always says about his class, "I spent three years incarcerated with those people. Why would I want to see them again?" Four years, in my case, since they switched over from junior highs to middle schools while I was in process, but the point remains. I wasn't sorry to graduate, and I've never gone back for any of the reunions that they've managed to scrape together.

But there was a part of me that was less opposed to the idea, and probably would have gone if the distances weren't so great. A quarter of a century is a long time, and you kind of wonder what happened to everyone. I've grown up some since then. I imagine most of them have too. And for all that it's supposed to be such a horror story, I had a good time in high school. I wouldn't do it again - once was fine, thank you, and as a professional historian I am well aware that the past is a great place to visit but a lousy place to live - but I made some good friends, I fell in love, I had some times that mean the world to me even now, and I wouldn't trade those.

It is an odd thing, this institutionalized practice of getting people together who once shared time and space. For a lot of us, we didn't share much more than that - my graduating class was about 380, and I knew maybe 2/3 of them by name and about half well enough to talk to. That's a lot of faces to keep from blurring.

Kim and I went to her 25th a couple years back (we're only a year different in age, but she was one of the youngest in her class and I was one of the oldest in mine, so we graduated two years apart) and it was fun, even just as someone in the spouse role. It's seeing history played out in front of you by people who were there, and the historian in me just loves that kind of thing. These people knew her then.

We live in a world of instant communication and social networking, where you can keep track of people a lot more easily than ever before. What is Facebook after all but one big eternal high school reunion? One way or another I keep up with most of the people I would have wanted to see had I gone to the reunion, so I don't feel too bad about missing it.

But the curiosity remains.

Happy 25th Reunion to Orwell's Class of 1984! Raise a glass to absent friends, and remember the stories. 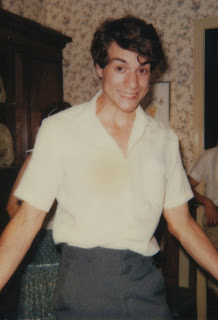 Would you want to see this again?

I'd see you again just for those famous eyebrows! :)