We have entered into the Thanksgiving season.

The girls are off from school, Home Campus has closed for non-flu-related reasons, and the long weekend stretches out before us like a swimming pool filled with chocolate pudding, waiting for us to dive in and emerge happy, sticky, and considerably heavier at the end.

I like Thanksgiving really. It is a holiday that has two levels, both of which are satisfying. At its core it is a reminder to us that no matter how bad things get, there is always something to be happy about, and furthermore things are not that bad to begin with. They are, in fact, good. It's helpful to hear that now and then. Boom-de-ada. And on the superficial level, a holiday devoted to calorie-comas and football is a wonderful thing.

The real glory of holidays, though, are the family stories that come out of them. We have a number of these in our family, but when we really want to tell A Thanksgiving Story this is the one we tell, more or less as it was told to me:

My Aunt Rita - well, "first cousin once removed," but that's just far too much of a mouthful - and Uncle Ed were newlyweds not far out of high school, and their families gathered at their house for Thanksgiving dinner that year. I don't recall ever meeting Ed's father but word is that he was a rather formidable person, and Rita was determined to make a good impression.

Apparently, Ed Sr. was a great fan of stuffing.

So Rita took that turkey and stuffed it full of stuffing. There wasn't room for one more stuffing molecule inside that turkey, not even if you used a jackhammer and a surgical probe. By God, her father-in-law was going to have stuffing for Thanksgiving.

Those of you who have roasted turkeys before can see where this story is going, but believe me - it never gets old.  No, no it does not.

The turkey came out of the oven perfectly roasted - golden brown, juicy, the sort of thing you normally only get in cookbook photographs. It was a sight. It was also quivering. Stuffing, as you eventually learn after you cook a few turkeys, expands when heated. At least it does when it has room to do so. And as anyone who has ever taken a science class will tell you, if you've got something that wants to expand and you don't let it expand, what you end up with is pressure. Lots of pressure. Lots of tasty, perfectly seasoned pressure.

The family gathered around the dining room table, dressed in their holiday best - this was the 1950s, when casual meant something rather different than it does now - and Ed Sr., as the senior male present, was accorded the honor of carving up the bird. He took his carving knife and stuck the point into the turkey.

There was a gelatinous roar, followed by an interlude of crisis.

When the air cleared, there was stuffing everywhere - on the walls, on the ceiling, on the guests, on the table. Everywhere but inside the turkey.

The story usually ends at that point, with Ed Sr. scraping stuffing off of his face and everyone else sitting there kind of shell-shocked. There's probably more to it, but really - how much more could you want?

Ed Sr. got his stuffing, more or less. We got a story. And a half-century later, Rita and Ed are still married.

There are things to be thankful for everywhere you turn. 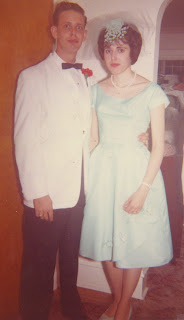 events safely behind them.

Oh, man! I laughed just as hard today as I did when I first heard Ed tell this story. You certainly captured the best family Thanksgiving story we have. Thanks for the memory and the laugh. Mom

The girls ask for this story regularly. It's a classic!

I just told Eric this story, and he was dubious (spoilsport!). But, but! He said he'd love to see the Mythbusters have a go at it! How cool would that be???

Well, in addition to hearing it from my mom (who wasn't there) I've also heard it from both Rita and Ed who were, so I figure they know what they saw.

I have to say that the idea of submitting it to Mythbusters occurred to us too, though. It would be fun to see if they could replicate it.