Darwin In The Dining Room

I’m trying to decide if hamsters are the bravest creatures on earth, or the stupidest. Or whether this is a distinction worth making.

Ever since we started bungie-ing (how exactly does one write that word?) their cage down on top of the little shelving unit in the dining room, there have been no repeats of the earlier episode where the cats knocked the cage to the floor in order to crack it like a walnut and get at the meat inside. And I think the hamsters are getting a little cocky about it.

Mithra usually leaves them alone – they clearly are not canned salmon and therefore hold no interest for her – but Tria is fascinated. She will climb up to where she can stare directly into their cage and just glare at them for a while. 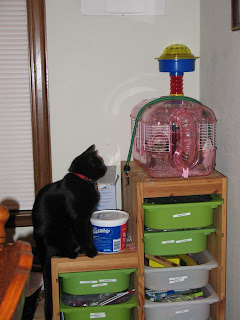 Eventually this gets old. It’s not like the cat has a lot of things to think about while she is staring at the hamsters. “Hamsters,” she thinks. “They look like food.” What more is there to say?  And so, after a short period of analyzing this, Tria will slowly reach up to the cage and begin batting at the grillwork, which the hamsters like to climb (why? because it’s there, I suppose – who knows with rodents) hoping to snag a hamster. 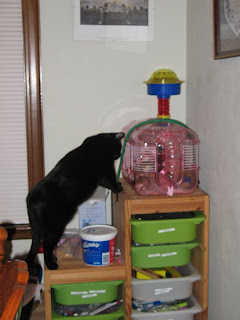 Now you would think that a critter the size of a hamster – a critter clearly designed by God and nature as a snack for larger and more pointy-edged creatures – would know enough that this was a bad situation, and that they should retreat to a more defensible position. Or at least get off the stupid grille. 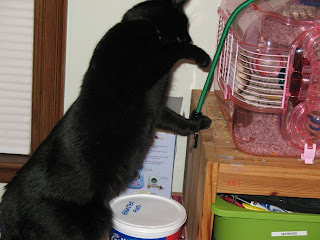 Look carefully at this photo. Do you see the small brownish lump just to the right of Tria’s paw? That’s Hammy. Or Vee. Either one. And do you know what Hammy (or Vee) is doing? Fighting back, that’s what – nipping at Tria’s claws, trying to bite the paw that’s about to feed on her.

Nobody has ever proven that intelligence has survival value over the long run, but this is ridiculous.

Of course, Tria cannot get into the cage - that being the point of the cage, after all - and the hamsters are usually far enough from the edge that they can’t be damaged by her claws, so it becomes something of a standoff after a while. 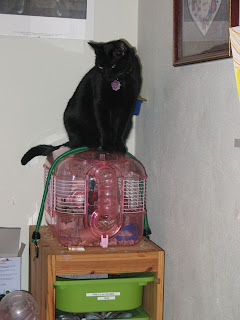 Seriously, why do we have a television?
Posted by David at 11:15 AM