There are times when you have to make choices in life. Last night was one of those times.

Through a combination of events too vague to recall, I have once again become the room parent for Tabitha's class at Not Bad President Elementary. It's not a bad gig, really - you make a few phone calls, show up to a few events, and you get to hang out with your kids at school. Plus people are generally very responsive when the Room Parent calls.  It's not much in the way of power, but it's mine and I'll take it.

Last night was the annual Halloween Parade down at NBPE - all of the kids come to school in their costumes and go from classroom to classroom holding out paper bags which they have decorated (and which are intentionally on the small side, the better to limit intake). We room parents or the folks we have gotten to volunteer in our place then fill those bags with goodies from the buckets and buckets of candy that people have brought in ahead of time.

Buckets.  You have never seen that much sugar in one place at one time.  It's all you can do to stuff it into those tiny bags and get rid of it.  Although the candy distributor does get to take a little off the top - including the Good Stuff like Reese's Peanut Butter Cups.  Consider it a tax of sorts.

Last night was also Movie Night at NBPE, since the schools across Wisconsin are closed today and tomorrow for administrative reasons. They were showing either Monsters vs. Aliens or Coraline. We've seen them both, and in the interests of avoiding another weeks-long nightmare run, we decided to avoid Coraline this time around. Monsters vs. Aliens was very much like Meet the Robinsons - a pleasant way to spend an hour and a half, but not much more than that. And that would be fine.

Last night was also Game 1 of the World Series, with the WFC's traveling up to New York to take on the Yankees in what every baseball writer capable of dragging their booze-soaked fingers across a dingy keyboard has described as the best match-up in a decade. Imagine - the Phillies as part of that.

A choice, therefore, had to be made.

And you know, it really wasn't much of a choice at all.

The girls spent the afternoon over at their friends' house, where the mom did an amazing job of facepainting the horde of ricocheting children and finding them old clothes to wear for their costumes. Tabitha, as usual, was a cat. Lauren decided on a witch this year.

I handed out candy. 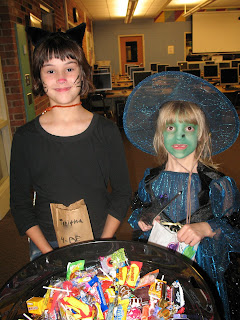 There will be World Series games forever, and some of them may well involve the Phillies now and again, but there just won't be that many more times Tabitha and Lauren will want me to hand out candy at their Halloween Parades. Plus, to be honest, the stress of watching the games can be more than I need these days.

We didn't actually stay for all of the movie. For one thing, the sound didn't work quite right and after a while you get tired of reading the lips of animated characters, since they don't quite line up anyway. Plus Tabitha said she was tired. So home we went.

And when I got home, there was the game, waiting for me - and the Phillies with a 1-0 lead that eventually they turned into a 6-1 victory that wasn't really that close. It was, indeed, a great game - at least from a Phillies fan perspective. Rarely in the life of a sports fan do you get to see a pitcher do what Cliff Lee did last night - completely dominate what is, arguably, the best team in the game. There is a reason why the WFCs are the underdog despite being WFCs - they are the second best team in baseball, and they were playing the best team in their house.  And they crushed them.

As are a lot of people, I suspect.  I wore my Phillies hat and t-shirt to the Halloween Parade and got more than a few supportive comments from people who just wanted the Yankees to lose to whomever they were playing.  And I'll take that.

We all stayed up to watch the rest of the game. Well, the girls and I stayed in the living room anyway, while Kim finished the game upstairs getting ready for bed, since she had to get up early today and the rest of us didn't. Lauren conked out on the couch somewhere around the 7th inning, but Tabitha made it to the end of the game.  It's these shared experiences that count, I think.  Parades, baseball - it's all good.