The Tooth Fairy arrived once again in our house last night, bearing one shiny golden coin and taking away one somewhat battered upper front tooth.

What does the Tooth Fairy do with those teeth, anyway? No, I really don't want to know. It's probably something creepy and I just don't need that information at this point in my life.

Lauren has the world's most stubborn teeth. They hang in there and hang in there, refusing to fall out until whacked by something with some force - a sister's elbow, for example, or a shirt being pulled overhead by a dad.

Her two front teeth had been loose since the summer, slowly turning yellow and leaving widening gaps where once there was an even row of reasonably whitish, non-gapped teeth. One finally got whacked out by Tabitha last week, and the Tooth Fairy duly arrived bearing gelt, but the other stayed around, wiggling defiantly and gradually migrating to the center of the space between the other, non-wiggly teeth.

Then I tried to help her get her shirt over her head so she could change into her jammies the other night, and - BOOM! - blood, tooth, and another visit. 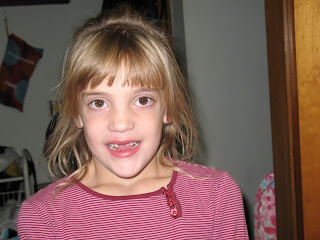 Naturally, we had to break out the Oreos. Because you only get one chance in life to make railroad tracks, and really, you should take it. 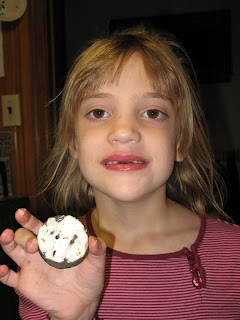