We've been preparing for Halloween around here.

It's not a holiday we can avoid anymore, not with children around and certainly not when one of those children happens to have a birthday on that day. Halloween is a very big holiday in Wisconsin. When I was growing up it was a fun thing and I certainly never missed a chance to dun my neighbors out of sugar, but it was not the main event that it is here.  And like any big event, you need to prepare.

Saturday we went over to the Pumpkin Patch on the south side of town for the Second Running of the Children, or whatever they call it. Basically you sign up and the kids run about half a mile around the fields, and in exchange they get a t-shirt and you get to go into the main building for some hot cider and fresh apple donuts, still warm from the oven. 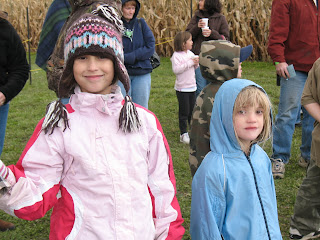 Lauren talked the organizers into letting her run with the big kids, since her birthday was just around the corner and she was tall enough to fit in.  And she beat Tabitha by three deciliters and a hectare or so.  The fact that Tabitha found a walking buddy halfway through probably helped, but victory is victory. 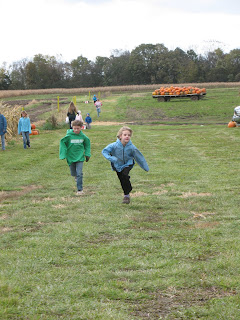 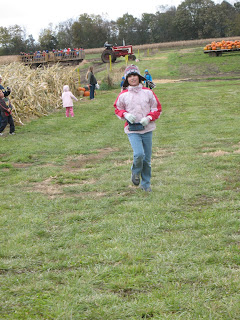 You also get a ticket for a wagon ride and an entry wristband for the Corn Maze. If you've never done a Corn Maze, it's really a lot of fun if you don't think about Steven King too much. You wander all over, picking up clues and checking your map, counting turns and steps until you eventually end up back where you started.

Like so many things in life, it's the experience, not the distance.

We decided not to worry about the wagon ride or the Corn Maze, though, since it was blustery and cold and there is only so much warmth a cup of hot cider will give you. We figured we'd come back Sunday.

And sure enough, Sunday was warmer. Sunny, even.

Before we went, though, we spent the day doing things around the house - cleaning the dining room floor, doing laundry, finishing homework, setting up gravestones in the front lawn. That sort of thing. 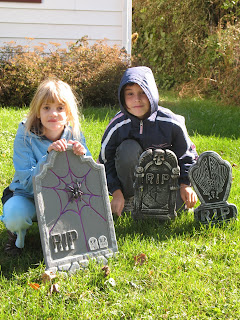 It's best just to go along with the spirit of the thing, really.

We did make it over to the Pumpkin Patch again after that, though rather late in the day. The girls scooted off in search of more pumpkins and we took our wagon ride, but we'll have to go back yet again for the Corn Maze this year. 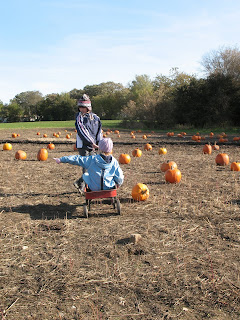 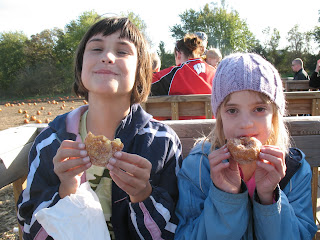