Busting Myths With Kari and Grant

The Kids Museum to the south of us was having a fundraiser, and they invited Kari and Grant from Mythbusters to speak. And you know we were there. You know that there was no force on earth that could make us not there. Not storms, not deadlines, not recessions, nothing. We were going to be there, by God, and woe betide anything that stood in our way.

We bought these tickets sometime in the spring, roughly fifteen seconds after they went on sale -only a dozen rows or so back, though hard up on the house right aisle. Not a bad trade, as it turned out.

And we counted down the days. One by one. For. Months. And. Months. Major wars have started with less anticipation than the Mythbusters coming to speak near us. As is appropriate.

We love Mythbusters around here. Any show that combines science education with explosive mayhem is always a good thing. It's the one show that we make time to watch, and often we do so as a family. On Wednesday, for example, when the new season starts, the girls will have special permission to stay up a bit later than usual to watch.

So a little rain was not going to keep us away.

We arrived at the theater with about ten minutes to spare, which counts as early around here. Fortunately there was parking right across the street, and we were well situated by the time the lights went out. 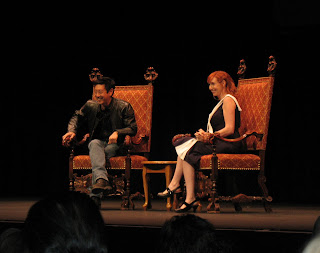 Then they got to the heart of the matter - the questions from the audience. "Does anyone have any questions?" the moderator asked. "Please go to the microphones set up in the aisles if you do!"

And as one, the audience rose up and marched over.

Well, not quite, but it certainly felt that way. Both Tabitha and Lauren decided they wanted to ask questions, so we tromped up to the line and waited our turn.

Don't they screen these people?

It must be said, though, that Kari and Grant were gracious, willing to listen to just about any question thrown at them and give a good solid try at answering. Grant got asked a lot about his experiences on Star Wars, and they both went through the usual things that people wanted to know about the show. Yes, Adam and Jamie are just like that in real life. The most dangerous myths are the small ones that they underestimate. They all knew each other prior to the show and remain good friends now that they are on the show. The biggest, most complicated, most expensive, most nerve-wracking thing they ever did was drop a car from a helicopter. The scariest was try to count sharks in the dark down on a wreck. 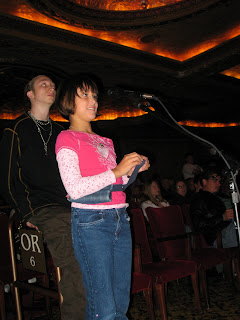 Tabitha asked them how many myths they had done. Over 700, it turned out. 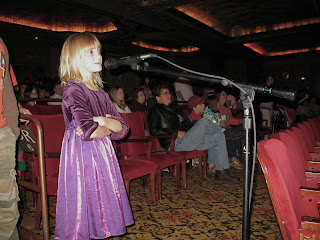 Lauren wanted to know what the weirdest myth they had ever tested was. That provoked a lot of interesting discussion, with the upshot being that the weirdest is yet to come. Really - it's in this season's episodes, and those who've seen Shrek and remember where he got his candle will know what this is all about. This also got their vote for the most disgusting myth they've ever tested.

Eventually the moderator stepped in and called the whole thing to a halt, roughly an hour and a half after it started. You got the feeling that they could have sat there and talked all day, though.

And to top it all off, the girls ran into their friend Becca there, and they got to play on the old rheostat board that the theater put out in the lobby when they redid the lights. So it was just about a perfect outing, really.
Posted by David at 10:31 PM

And Becca greatly enjoyed it too. You should've seen her eyes pop when she heard Tabitha's voice from the vicinity of the orchestra pit. :-)