The Story of Our Summer, Part the First

Our summer began on December 22nd.

Every other year we pack up our bags and head to Philadelphia for Christmas, and last year was one of those years. Unfortunately, last year was also One Of Those Years, at least as far as winter weather went. It snowed almost every other day between Thanksgiving and Easter, and when it wasn't snowing it was either raining (which then turned to ice, or ran into our basement and then turned to ice) or so cold that it made the wiper fluid in your car freeze. Naturally, this was the year I was commuting 2 hours each way to teach. Fortunately, it almost always snowed on Sunday, Tuesday or Thursday, so I only missed one day of school. 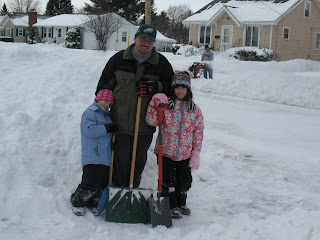 On the day of our flight, it actually did not snow. Well, we think it didn't snow. The fog was so thick that it might have been a blizzard, for all we could tell, but the roads seemed clear. We called the airline before we left for Milwaukee, and they said, "Sure we're flying! Come see for yourselves!" So we stuffed the car with all of the bags we had packed up (vide supra), and headed off. We eventually found the airport (it was that big shiny thing near the lake), and we headed toward the curbside check-in guy, for to check in by the curbside. He said, why are you here? To fly? we responded. Uh, no, he said.

Apparently in the interval between leaving our home and locating the check-in guy, the entire airport had been shut down and nothing was coming in or out. The line to get to the ticket counter for The Next Flight Out stretched back nearly to Omaha, and people were walking past us triumphantly declaring, "We got a flight out! It's in March!" Things did not look good, especially since we weren't sure if we could leave - sometimes if you leave, you forfeit rebooking rights. But when the airline spokesperson told us to go away, we figured we were okay to leave.

We thought about it for bit. We were already cutting it close - my side of the family celebrates on Christmas Eve, after all, and has for generations. Christmas Day has been something of an afterthought for as long as I can remember, especially since my brother and I got too old and Santa crossed us off his list. It's a fun day - we get up and hang out, family and friends come over, and we spend an inordinate amount of time eating. If that isn't a good day, what is? Christmas Eve, though - that's the main holiday. And to top it all off, this was the year we were going to get new family portraits taken to replace the ones that showed Lauren as a baby and didn't show Cousin Sara at all. We had to get there.

Well, we decided, the hell with it. We're all packed. We're closer to Philadelphia than we were this morning. The girls have already done this trip once, last summer, and there was no lasting damage to car, psyches or marriage. So we drove out of the airport and headed east. It was an adventure, really. The fog cleared off somewhere south of Chicago. We at dinner on the road in Indiana and made it into Ohio before stopping for the night. The girls were Excellent Travelers, especially since we had not really planned for this and had very little in the car in the way of entertainment (we practically memorized The Barenaked Ladies' Christmas CD, which was one of only a handful we had with us). And we got our family portraits and Christmas Eve. 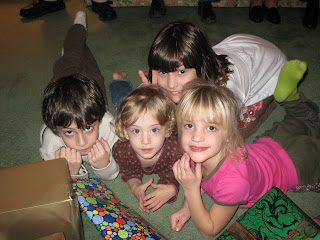 The Cousins Gather for Not Quite The Portrait
We also got vouchers good for one free flight anywhere in the US. So naturally we went to San Francisco. I mean, where else would we go?
Posted by David at 11:22 AM