And Now a Word from the Royal Family

Lauren got a letter from two real princesses on Tuesday!

Or at least from their secretary, who was at great pains to point out that the princesses did in fact ask her to write that letter. And this was close enough.

Four years ago, when Lauren was about 18 months old, we took to the girls to Europe for a really great tour. We visited friends in the UK and in Sweden, and I suppose at some point I should devote some space just to that trip. But when we were in Sweden, we went to visit the palace of the Swedish royal family, and we bought a few postcards with their group photos. 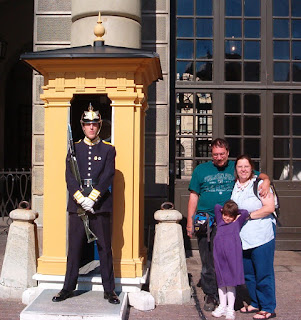 David, Kim and Tabitha at the Swedish Royal Palace,
Stockholm (2004). Lauren is watching this
from her stroller, and is highly amused.
Now, the Swedish royal family does not strike fear into the hearts of its enemies, at least not in their photos. There are two princesses (Victoria and Madeleine, both attractive young ladies), one prince (Carl Philip, an earnest-looking young man), the Queen (Silvia) and, finally, His Majesty King Carl XVI Gustav, who bears a striking resemblance to Capt. Stubing of the Love Boat, especially in those royal photos where the king is in his Navy uniform. It does take some of the majesty out of it when you think about it that way, but there it is. They look like a pleasant enough bunch of royalty, and from what we understand they do not make a habit of riding about the countryside lopping off heads or forcing people to eat strange Swedish foods, so that is okay by us.

Needless to say, both Tabitha and Lauren were utterly fascinated by the idea that there existed - right here, in this very world - real princesses. The fact that they appeared to be relatively normal and were not decked out in pink gowns that flowed like honey and could be used as flotation devices in the event of a water landing did not faze them - these were Honest To God Princesses, and that made the world a much more special place to be. Tabitha treasured those photo postcards for years, but Lauren, being younger, was less devoted.

This summer, our Swedish friends came back for a visit (more on that later), and brought with them Magazines. Royal magazines. The sort of magazines that in this country would be devoted to Jennifer Anniston and have an entire bureau solely responsible for the latest doings of ... who was that? Old news. Who's next?

Lauren was just captivated by these magazines, and sometime in September she drew a picture of the princesses to send to them. Kim transcribed a letter from Lauren to the princesses to go along with the picture, and we sent the whole mess off in the mail.

And on Tuesday we got a polite response with - and here is the sweet part - another photo of the royal family! One that Lauren can call her very own. She took it to school for show and tell.
Posted by David at 11:47 AM