On Friday night, I wore my high heels out on the town. 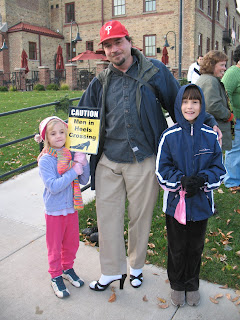 Now, I've always felt that high heels were rather ridiculous, even on women. On a crowd of men, most of them still wearing their normal clothing, they look even worse. Though, to be fair, there were a few men in the crowd who got a little more into the spirit of the thing and came in drag. It was not an improvement.

But it was for a good cause. We gathered at our starting point, milling around and taking pictures and hamming it up for the news cameras. Then there were a couple of short talks, most of which were completely inaudible, but the one speaker who made himself heard was the chief of the local police department, who thanked us for raising all of this money for the YWCA's domestic violence prevention programs and brought home the seriousness of the event by describing the latest such call that the police had had to respond to. It was only hours before he spoke.

But there is only so serious one can be in a crowd of men wearing high heels, and so - our spirits rising along with our calves - we headed off into town to "walk a mile in her shoes."

Great googly moogly, people, whoever thought these shoes were a good idea? They have no padding. They leave you canted at obscure angles. They sink into the ground, into cracks in the sidewalk, and even the asphalt. And, as at least one person found out, they break. Easily.

But we soldiered on, waving our signs and grimacing. Tabitha and Lauren marched along with me (though most of the time they stuck close to the little dog in the gold satin booties), and Kim led the parade for a while as one of the designated route-runners. The motorists we passed all honked approvingly, perhaps because if they didn't they would be run down by squadrons of well-heeled Harley dudes in leather and pumps. Harleys carry a lot of cultural weight in our little town.

We made it a mile, and then I took the girls home to a sitter and returned to the party, where - as promised - there were hors d'oeuvres and wine in quantity. We raised a whole pile of money, and had a good time doing it too. Some people might have had just a little too good of a time - I refer specifically to the gentleman in the plexiglass shoes with the six-inch heels that lit up whenever he took a step, and the phalanx of men in sparkly red shoes that the Wicked Witch of the West would just kill for - but that just couldn't be helped, now, could it.

But if you think I'm going to make a habit of this, you can jolly well think again. If I ever do decide to be a transvestite, I'll stick with flats. Those heels hurt. 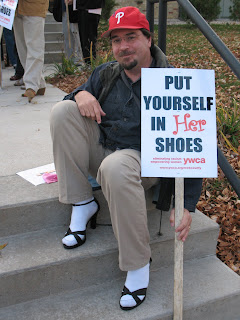 Great job for a good cause! I see you were properly attired for this event, that is, you wore your Phillies hat. Go Phillies!!! One win more to go and you will have to revisit your October 1st blog.