New rule: the wilderness must be sprayed with pesticides. Industrial strength pesticides. In large quantities, in high concentrations, regardless of the consequences. The bugs have taken over, and they're not happy with us. We need to get them now while we still can.

We went up to Michigan this past weekend for our first taste of Halloween. And let it be said that we had a really great time - the girls got to visit with Uncle Dave and Aunt Karen, and especially with cousin Emily, and we ate a lot of good food. But building a home near a wetland does have its drawbacks, notably the cloud of mosquitoes that blotted out the sun, drowned out the music and left the drained and desiccated carcasses of those who forgot their bug spray strewn about like so much leftover jerky at a cowboy convention.

We arrived shortly before dinner, dosed ourselves liberally with chemicals, and set about having the aforementioned good time. The girls flew off with Emily and the ever-increasing host of children, running about the grass and trees and seeking out the candy supplies that had been cleverly hidden here and there. Kim and I set up the tent and busied ourselves helping out with the preparations as best we could - most of it was pretty well in hand.

Kim actually spent most of the evening painting the faces of various children, which was a big hit. Several still had their paint on the next morning, which no doubt made school Monday an interesting experience. All night long there were little kitties, mice, butterflies and other assorted painted children running about. 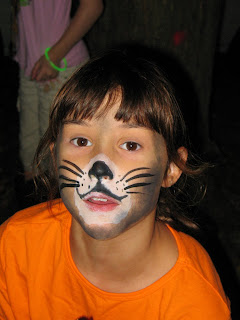 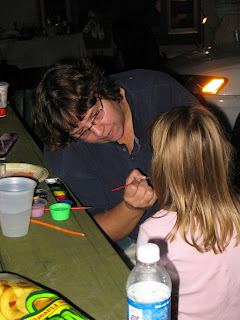 After dinner, we were treated to the Asinine Theater production of ghost stories silhouetted against a white backdrop while the narrator eerily intoned "Hairy toe! Hairy toe! Give me back my hairy toe!" And you know, we heard that all the way back home. Thanks guys! When the show was over it was: Karaoke time! There was a karaoke machine cleverly hidden off in a garage on the edge of the property (thus to minimize the damage to everyone else's ears), and it was stocked - STOCKED! - with classic rock, kids' music, and assorted goodies. Kim and I spent much of the evening there, belting out "Bohemian Rhapsody," "Paradise by the Dashboard Light," and, when the girls were around, various half-remembered Hannah Montana songs. And Disney - lots of that too. But Violent Femmes! And Nilsson! We had a grand time, though whether anyone else did is an open, and frankly immaterial, question. We only took a break to travel the Haunted Trail that Dave had laid out through the bog, along the creek and up the hill. It was appropriately scary, too. The girls loved it.

We spent the night in the tent. We laid out several sleeping bags on top of two layers of foam mats, and you know - I'm just getting too old to be doing that. We got a good night's sleep - the girls conked right out, which was not surprising considering that it was midnight our time when we finally lay down - but there were a great many twinges in the morning that weren't there the night before. At least it kept the mosquitoes out, because by morning they were back in full force, and managed to penetrate our meager chemical defenses to such a degree that Lauren ended up in an oatmeal bath when we got home and Tabitha ended up at Urgent Care after one of her bites got infected.

DDT. Bring it back. Now.

We finally dragged ourselves away from family and fun around lunchtime and headed off. We stopped for lunch at a small cafe in Inner Nowhere, MI, a place that failed miserably to be a restaurant worth going back to but did have the sterling quality of stocking Cone Guys ice cream cones. Ask for them by name!
Posted by David at 11:57 AM