The Phillies are in the playoffs, for the eleventh time in their 126-year history, and as any Philadelphia sports fan knows this is simply the opening act of what will no doubt become an anguishing slide toward ignominious defeat. The Phillies are the only sports franchise in human history to have 10,000 defeats. They have won exactly one World Series - in 1980, after almost a century of futility. Their collapse in 1964 is still a topic of debate as if it happened yesterday instead of more than a decade before most of the current roster was born. What will happen is only a matter of time.

We don't expect to win, we sports fans from Philadelphia, and we are rarely disappointed. It's an odd cross to bear. In a nation which celebrates victory over all other concerns and whose culture is relentlessly optimistic, we know the familiarity of defeat and the all-encompassing knowledge of pessimism. Philadelphia sports fans understand Norse mythology, because the gods lose in the end.

On my computer's desktop is one of those "widget" things that the Young Folks think are so cool (or groovy, or phat, or whatever new and shiny term is currently beyond my ken). A nondescript brown blob with a timer in it, it is entitled "The Cheesesteak of Suffering" and simply keeps track of how long it has been since either the Phillies, Eagles, Flyers or 76ers have won a championship. Right now it's at almost 9,256 days and counting, though you can check to the second if you'd like. This is rather macabre, if you think about it. First, someone had to be morose enough to conceive and execute something like this, and then I had to go think it was worth putting onto my computer. Celebrations are where you find them, I suppose.

I like to think that having this background has prepared me well for life. Life is not fair. Bad things happen to good people and good things happen to bad ones. Products that work are discontinued, while neckties never go out of fashion. Empty-headed, ideologically-driven, Constitution-shredding, environment-destroying, greed-enabling, right-wing nutjobs dominate our political culture, while people who might actually exercise power without destroying our national culture, international standing or financial system are sitting on the sidelines trying to figure out how they can get a vote in edgewise. The wrong teams win - even when no team from Philadelphia is even playing, still the wrong teams win (that's addressed to you, Cowboys fans...).

And yet, for all that, good things do happen. Children are born, children who make your world a better place, who give you reason to soldier on and struggle against the general unfairness, to at least try to make a localized pool of good vibes for them. Spouses make you fall in love all over again, every day. Booksellers continue to exist despite everything. Sometimes the world screws up and the good guys win one. And the optimists never really appreciate this. They just assume that this is natural. It isn't natural. It's a treasure - a gift that must be savored, husbanded, hoarded against the inevitable return of pig-headed normalcy. 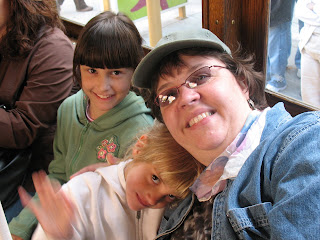 I was 14 when the Phillies won the Series. I had followed them for as long as I could remember, watching games with my dad - sometimes even down at the stadium - and my grandfather, who always had the Phillies on television. They had come close the year before or so, but that year they finally made it. They confounded the unfair world, and actually Did Not Lose. It was astonishing, as much as anything else. I can still remember watching every inning of every game. I remember when Tug McGraw - the man who gave relief pitchers their deservedly goofy reputation - got the last strike-out and the whole region went nuts, honking and yelling. I stood on the little porch outside our front door and just listened. It was wonderful.

I don't know if the will do it again this year. I rather expect they won't, since there are several better teams in the playoffs and expecting to win just isn't in my nature anyhow. But it would be nice to be pleasantly surprised, yes it would.
Posted by David at 11:44 PM