Well, in the "Anything You Can Do, I Can Do Better" way of things that defines the sibling relationship, we now have two - count 'em, two - bike riders in the family. Three if you count Kim. Four if my decades-old activities are still valid for reporting purposes.

Yesterday Tabitha decided she wanted to go out on her bike, to test her newfound skills. She did a marvelous job of it, too - riding in circles around the driveway to show that she has gotten the hang of "turning" (a useful skill) and demonstrating her mastery of starting and stopping without changing the shape of anything or anyone in the vicinity. I tell you, once the light bulb clicks on, the progress is astonishingly quick. 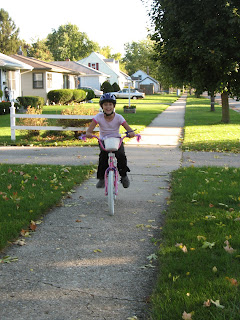 In the meantime, I had Lauren out on the Pedal-less Bike, a device designed to encourage balance and get her used to the idea of the bike itself, without training wheels. Well, after about five minutes of that it was clear that this was just Not Going To Do At All, so I put the pedals back on and we headed back out to the sidewalk. A quick jog down the walk holding onto the bike while Lauren pedaled, followed by "I'm going to let go now!" "Okay!" and off she went. Zip! Zam! Zoom! 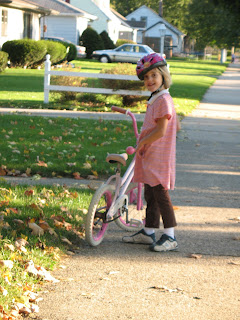 And now there are two. 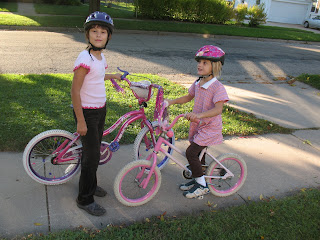 I spent a lot of my childhood perched on a succession of red bicycles, zipping around the neighborhood with various friends. Eventually I graduated to a blue one - a 10-speed with racing handlebars that curled under (do they even make those anymore?). It was made of cast iron and weighed approximately as much as any of the Chevy Novas that my family owned over the years, but I put a lot of miles on it. The high point was a trip out to Granite Run Mall with my friend Bobby - a trip that involved schlepping up the sheer face of Lawrence Road, barreling down US Route 1, and merging onto US 322 before doing the whole thing in reverse. Bobby got a flat tire somewhere on 1, but we managed to get it repaired before we came home. It was quite a trip. I'm not sure my mother ever forgave my father for giving us permission to do it, but it was worth it to us.

I carried that bike with me to Pittsburgh, and eventually to Iowa. I didn't ride it much, though. Pittsburgh is one continuous Lawrence Road, and I generally walked in Iowa. Eventually, after I moved to Wisconsin, Kim gave the old Cast Iron Schwinn to a friend of ours who was bereft of other transportation, and eventually it died of sclerotic old age. The bike, not the friend.

Now I get to imagine just what Tabitha and Lauren's "Granite Run Mall" adventure will be. But that's a ways off. Right now, the main thing is to make sure that they can steer well enough to avoid running over the cat, who insists that she has the right of way on the sidewalk. She may well be right, but if it comes to a contest, she won't be right for long. 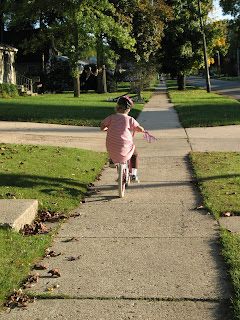