The chicken is gone.

Sometime this past winter while I was taking Lauren over to visit a friend of hers on the other side of town I noticed that one of the houses along the way was guarded by a giant metal chicken. 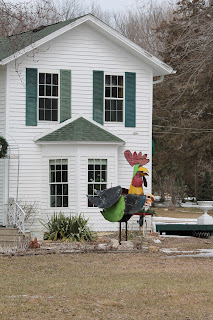 I am not sure what made the owners of this house decide that metal poultry would be the best security system for their property.  One imagines that not many burglars have experience in dealing with such things (“Hey!  We’re being stalked by a giant metal chicken!”  “Yeah, right.  Pull the other one, it’s got bells on.”  “No, really, there’s ... URK.”  “Uh, Bob?”) so there is always the sheer novelty of it to make it work.  Plus, chickens work for scraps, so the expense is fairly low.  You could just find an old Pontiac and let them forage for months off its carcass.  It's a pretty good system, now that I think about it.  Perhaps there should be a bigger market for this sort of thing.

But this week it appears that the house is now unguarded.  The chicken is no longer at its post.  Which of course begs a question:

Where did it go?

Is it roaming around Our Little Town, full of fowl dreams of vengeance and violence?  Is there a Frankenchicken clonking around the neighborhood and giving the local cats a taste of their own predatory medicine?

Or perhaps it has been shipped off to guard more sensitive installations in other parts of the country?  Does anyone know the security rating of a metal chicken?  I imagine they could do a fine job of guarding most things, though anything that involved radioactivity or excessive magnetism would probably be a bit hard for them.

Maybe it just found a mate somewhere and eloped.  That would be a nice way for this to end.  If you hear clanging in the night, think fondly of a chicken who has found love.

But watch for the eggs.  When they hatch, there will be shrapnel.

They have run off together.

Possibly, though I don't know what the chicken's name was.

I think I will just declare you the winner on general principles. :)