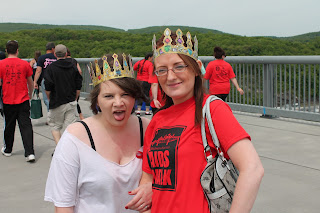 I have no idea who these young ladies are.

When Kim and I started walking across the pedestrian bridge over the Hudson River this past weekend we discovered that we were not alone.  On the one hand, we didn’t figure the bridge would be abandoned – it’s a lovely view, after all, and they wouldn’t put a bridge there unless they expected it to carry some traffic.  On the other hand, well, we didn’t think we’d be quite that not alone.

Apparently Saturday was the annual Hudson Valley AIDS Walk.  There were several hundred people strolling by in bright red t-shirts, presumably having made prior arrangements for donations to the cause for this effort.  The bridge was festooned with hopeful signs describing the services of an AIDS activist group that had recently renamed itself and had therefore had to tape labels bearing its new acronym over top of the appropriate places on last year’s signs.  We let them pass by, since they seemed rather more determined than we were regarding their desire to get from Point A (being defined as here) to Point B (being defined as over there, on the other side of the river).

But there were stragglers, and we stopped these two to see if they would take our photo there on the bridge with the river in the background.  “Sure,” they said, almost in unison.  “But we want you to take our picture too!”

“But I have no way of getting you a copy,” I said.

“Doesn’t matter,” one replied.  “We just want our picture taken.”  So I did, and they were happy.

What is it that makes us want our photo taken?  Not everybody does, of course – I’m always happier behind the camera than in front of it, myself – but many people do.

I think there is a sense that photos capture a moment, that they freeze what would otherwise be ephemeral into something that is permanent, or at least something that lasts a little while longer than the moment itself.  It is a way of announcing to the world that you were here, that you walked on this earth and enjoyed its sunshine and loved some of your fellow creatures, and that this ought to be remembered.

It doesn’t even matter who remembers, really.  Just that someone does.

I don’t know the backstory behind these two women.  Perhaps they were just messing with the tourists (they certainly had a lot of fun taking our pictures).  Or perhaps the fact that they were marching in an AIDS Walk meant that they understood a bit more personally than they would have liked to understand at such a young age just how impermanent things really are in this world, and how important it is to remember and be remembered.

I hope they think to google themselves soon and find this photo, and know that they are remembered, as much as two friendly but nameless women on a bridge can be remembered.
Posted by David at 5:03 PM

I'm not sure who they are either, but they asked to buy my crown for a quarter. In the generous spirit of the day, I let them have it for free. :-)

Yes, that would definitely be in keeping with the day. Well done! :)

Oh, and if you should ever find them, please let them know their picture is here! Thanks.

James, that's really cool! I also loved that they made us adopt several poses when they took our photo, including one where we were growling at the camera (rawwrr!) with claw hands. I hope they continued to have a great day.