It’s been a frantically busy time here in Our Little Town, as the ends of semesters tend to be.  Between the grading, exam prep and class prep that are part of the academic lifestyle (along with being a political football, griping about how students aren’t as prepared as they were back when we were in school [what psychologists refer to as “amnesia”], and a general obsession with office supplies) on the one hand and all of the events, occasions, and “volunteer opportunities” on the other, things can get pretty blurred.

But you need to write things down, because otherwise they get forgotten.  And there are times when that is the main function of this blog.

I’m not going to get into the academic side, because that is still ongoing and – at this point of the semester – not really something I want to dwell on right now, in large part because I live there every waking minute and more than a few non-waking minutes – it’s a bad thing when your dreams revolve around grading essays.  Instead, there are events to report!  And those are more fun.

Every year Not Bad President Elementary hosts its Art Show, where the students have various projects mounted all over the school and the parents cruise the halls in search of the ones produced by their children.  We’ve been doing this for nine years now, and it is kind of odd to think that next year will be our last one.

After nine years you learn a few things.  Notably, you learn not to get there right when it starts, because the phrase for that is “mob scene.”  The art isn’t going anywhere, and if you wait until about halfway through you can take the time to absorb your child’s craft without feeling like you’re at the Louvre and being carried away by the crowd before you even get your camera focused.

Lauren knew right where her art was, and it was lovely. 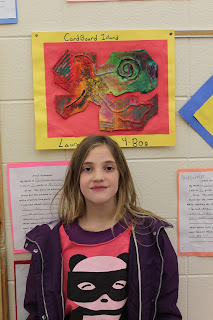 We’ve also been back at the 4H Cat Show.  Well, Tabitha and I were.  Lauren joined us late, and Kim mostly spent the day frantically trying to catch up on her new administrative post – a job that, at least until finals are in, she is doing on top of the other job she is doing.  She’s kind of Doppler-shifted these days.

So once more I spent a Friday night setting things up – getting the food booth ready, mostly.  We got there after the tables and chairs were up, which my back appreciated, but there’s always something to be done.

The next morning I got there way to early and once again tried to figure out how to make coffee.  Fortunately once again someone else stepped in, and thus nobody got mad.  I spent the rest of the day at the food booth, dishing out nachos and barbecue beef (sometimes combined, which is surprisingly tasty even though it provides negative nutritional value) until we ran out.  Kim dropped Tabitha and Midgie off a bit later before heading off to get Lauren from her friend’s house (another sleepover!) and taking her to Home Campus for a while.  Lauren spent her time on campus making a giant TARDIS for Kim’s office door.

That makes me astonishingly happy.

The results of this second cat show were largely the same as the results from the last one.  Midgie was put in a class with seven other cats.  Two were declared “blue ribbon” kitties, one of whom got the top prize of a trophy.  Four, including Midgie, were placed in the red ribbon category.  And the two who drew blood from the judge got white ribbons, which are the 4H’s way of saying, “Thanks for playing – better luck next time.”  It’s better than a year’s supply of Rice-A-Roni, I suppose, though a friend of mine did point out that perhaps a red ribbon would have been more appropriate for a cat who draws blood.

Tabitha did very well managing Midgie through this process.  All of the cats were grumpy because of the oncoming rainstorm, so it was not easy. 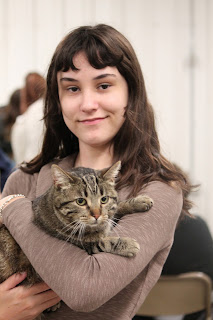 Finally for this post, there was the annual Music Recital.  Both girls take music lessons from a friend of ours, and every year she rents out one of the local halls (the same one where Kim and I had our wedding reception) for a recital.  It’s a friendly event with a supportive audience, and then there is food.

Lauren was the first up, which was not something she wanted to be.  But she did a good job with her piece – most importantly, when she made a mistake she figured out how to correct it and then soldiered on, which is a valuable lesson in life.  Then a friend of hers joined her up there and they did a duet. 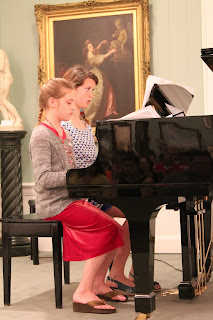 Tabitha was the only violinist on the program, and she too did a nice job with her pieces.  It was a good change of pace, amid all those pianists. This was also when Lauren received her Gold Cup.  This recital is just for our friend's students (and, this year, a number of students from another teacher as well), but in February there is the official Music Festival.  That's quite an event.  Music students from all over the county come to be judged by professionals on two memorized pieces.  You get graded on a 5-point scale, and once you hit 15 points you get a Gold Cup.  So if you do the math, you realize that to get one of these things you have to be really good for three straight years, or mostly good for longer.

This was Lauren's third year.

There is a delay while they actually get the cups engraved, so you don't actually get it until May.  But it's good to know that it's coming. 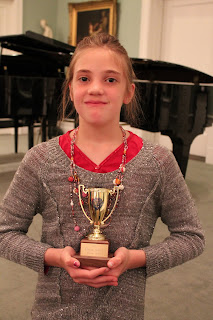 And then there was food.  Because in Wisconsin, there is always food.  It's one of the things I like about Wisconsin.

Kim’s parents came down for the concert.  It’s a long drive, and the girls appreciate that kind of support.  Plus, it’s always nice to see them anyway. 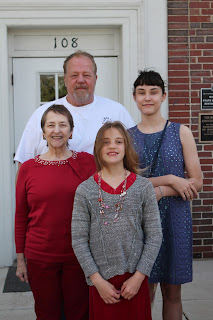 I am proud of my girls.