A Day at the Track

Yesterday was the big City-Wide Track Meet here in Our Little Town.

Every year they gather up the 4th and 5th graders from all of the various elementary schools and bus them over to the central stadium where the high schools play football.  Like most high school football fields, it is surrounded by the track – I remember this from when I was running track in high school, which was unfortunately during the lacrosse season (a much bigger sport at my high school than football) which in turn meant that we runners had to be fairly adept at dodging the loose balls that went rocketing by on a semi-regular basis.

Here in Our Little City they divide up the 4th and 5th graders by grade, and further divide them by school – only about half the schools can show up at a given time – but even so, there are a lot of kids out there running around.  And since Lauren is now in 4th grade, she gets to be one of them.

I dropped her off at school early so she could ride the bus over, and then I went to the stadium to park.  You have to get there early, otherwise you might as well park in your own driveway and walk over.  It’s good that these events get supported by the community that way, even so.

Most of the events of the morning took place in a steady rain – the sort of weather that would add zip to a football game and cancel a baseball game, but which just left us a bit puzzled as to what to do about a track meet.  It didn’t affect the running events all that much, but some of the field events – notably the high jump, which requires a fairly solid plant just before you jump – were a bit tricky.

Not that this affected the kids much.  They poured into the stadium, resplendent in their matching t-shirts.  Each school gets its own color – red, orange, white, various shades of blue, and so on.  You can easily identify dear old Not Bad President Elementary by its vocal yellow shirts, which – on a grey rainy day – made them instantly recognizable.  The kids bounced into the stands, buzzing and fidgeting, and generally spent the day having a grand time as far as I could tell.

Lauren was in four events.

Her first, right off the bat, was the 50-yard dash.  This is one of her strengths, and she was ready for it. 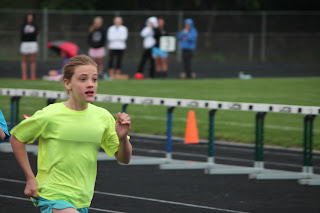 After an initial qualifying heat, she ended up in the final and came in first place! 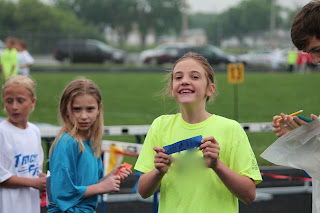 Her next event was the high jump, which she was notably less confident about but preferred to the hurdles, which is where she was originally scheduled to compete before switching out.  And I don’t blame her.  As my friend Tiz once said about the hurdles, “It’s bad enough they make you run all that way, but then they go and put things in your path!”  If you’re going to jump over things, you might as well get it over with all at once.

It turned out Lauren had no reason to worry about the jumping, and she came in second place. 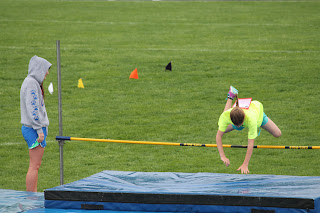 The tricky part, she told us later, was that with all that rain the mats were just soaked.  It takes a certain focus to be able to jump in the head-first style that they train these kids to use in these meets knowing that you’re going to come down face first into a puddle.

Her next event was the long jump, and – upholding what is apparently a family tradition dating back to when Tabitha was in these meets – she scored a second place finish there too. 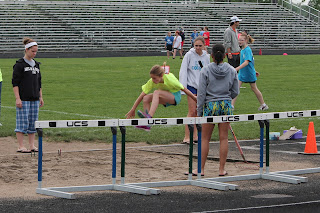 The fun part of watching for us was that it was clear that Lauren was having an immensely good time out there.  She’d be waiting for her turn and bouncing up and down, dancing and generally enjoying herself with her friends.  And really, that’s the whole point of this exercise. 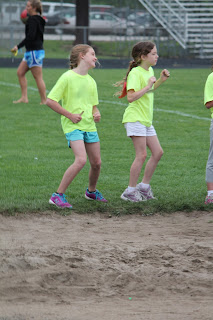 The final event of the day is the 6x50 relay.  They gather up all of the various teams and space half of their members across the end zone of the football field and the other half at the 50-yard-line, and they run back and forth.  The result has all the organizational precision of a medieval battle and is thus an awful lot of fun to watch.

Lauren’s team won its qualifying heat, with Lauren running the anchor leg and just managing to hold off a hard charging boy from one of the other schools.

And in the final, she did it again. 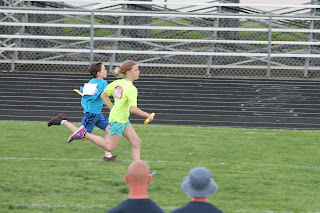 I’d say that the combined margin of victory in both heats was something less than a yard, but there she was, in first place with her teammates.  This despite the fact that an earlier runner had actually dropped the baton – they were all just that fast and they made up the ground rapidly.

It was a grand and glorious (if rather damp) day here in Our Little Town.