So where were you this past Saturday morning?

The correct answer, by the way, is “I was attending the 4H Drama Festival down at Home Campus, thank you!”  Because that’s where you should have been.

Every year the local 4H clubs have a Drama Festival.  Like most things involving 4H it is a fair amount of fun, a whole lot of work, and a genuine time-sink, but one that you end up doing again next year because it was worth it in retrospect.  Each club gets about half an hour total for their play, including set-up, performance, and strike, and it runs pretty much all day.

We’ve been rehearsing this for a couple of months, in between the snowstorms that always magically seemed to appear on Tuesdays this winter.  The kids put a lot of effort into it.

Mostly this is about teaching kids theater, since they have to do it all – how to write a play, how to act in a play, and in our case how to do tech.  We’re one of the few groups that does any real tech stuff for their play, which is probably a function of a) the fact that I’m one of the leaders of this outfit (below Kim and Jamie, who handle everything else) and b) I have the keys to the theater so we can actually get in there and do some tech stuff.  Tech doesn’t just happen on the day of the show – you have to prepare.

This year Tabitha once again was running the lighting board, which involved a number of cues where the lights flickered off and on as well as several “solo bump” cues where one lighting instrument comes up full and everything else cuts to black.  Her buddy Taryn handled the sound cues on her own keyboard, which we plugged into the system in the theater. 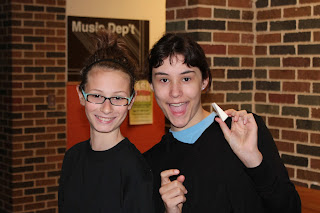 This year’s play (written by Addie, one of the kids in the troop) centered around the idea of a bunch of aliens invading the annual 4H Fair on “Detective Day,” when – naturally – the Scooby-Doo gang, Sherlock Holmes, and the Men In Black would be attending. 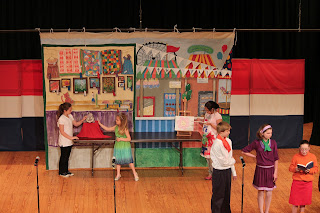 That backdrop is actually tied to a bar that rises up into the flyspace above the stage – Tabitha, Taryn and I came in one Sunday night to tie it onto the bar.  Part of my job as the tech guy was to teach Tabitha, Taryn and Addie (who ended up being the one running that part of the tech, as the other two were in the rear of the house running sound and lights) how to work the ropes to bring it in and out.  It’s an interesting task, and one that I didn’t get to learn until much later in my theatrical career.

Back at the Fair, several items go missing (“Jinkies!”). 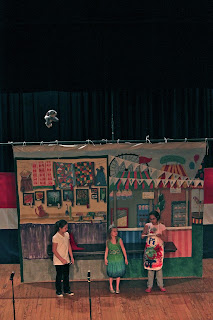 Getting those items to go up was a trick.  The same night we tied the backdrop up, we also rigged up a pulley system on another bar where each of the three items that disappears gets clipped to a fishing line that runs up, over, and down.  At the appropriate moment, Addie would haul on the correct line while Tabitha made the lights flicker and Taryn added eerie sounds.

The problem with getting a review of a performance from the tech guy is that you hear an awful lot about the tech.

With the missing items causing consternation among the 4H fairgoers, the various detectives jump in to try to solve the case (“Elementary, my dear Watson!”).  Lauren played Scooby-Doo, much to her eternal delight, and ended up with a number of speaking lines. 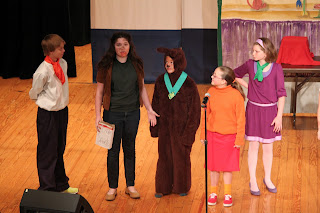 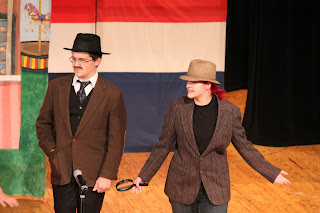 Eventually we discover that it was in fact the aliens who were making the items disappear – not Professor Moriarity, or even Old Man Jenkins.  Aliens say “beep,” by the way. 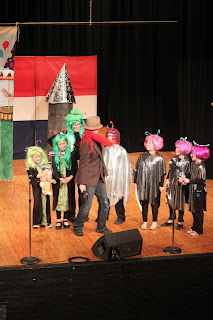 There is an interlude of crisis, as one would imagine there would be given the discovery that what you thought was a garden-variety theft has suddenly morphed into First Contact, which may or may not be an improvement from the “we’re having a crisis” standpoint.  (“Ruh-roh!  Raliens!”) 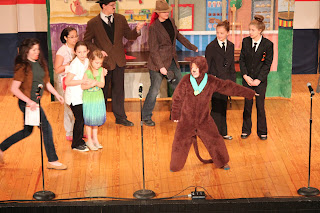 But it all works out in the end.  The aliens return the missing items and go home to set up their own fair, and the MIBs erase everyone’s memory (“Would you look right here, please…”). 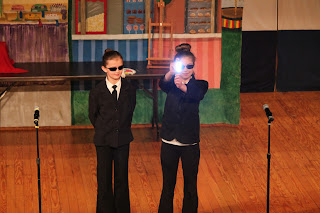 They did a really nice job with the play.  Everyone remembered their lines and projected them to the back of the house.  The tech stuff went off without a hitch.  And the judges liked it.

Did I mention there were judges?

This is a competition.  Like most 4H events, there are categories of ribbons – blue category, red category, white category.  This is our third year doing this, and every year we have been in the blue ribbon category.  That’s where we like to be.

This year, however, the judges liked us so much that they awarded us the championship.  On the one hand, this is quite a nice honor.  The kids worked very hard on this, and it’s good to see them get recognized for it.  On the other hand, well, this means that they want us to do it at the State Fair in August.

For those of you who have not been to the Wisconsin State Fair, it is about what you would expect you would find when you put far too many residents of a state known for beer consumption together on a hot summer day and give them carnival rides and livestock.  It’s fun in a chaotic, “protect the weak and the slow” sort of way.  Putting on a 4H play in that environment is really not something we were hoping to achieve.  You know all that tech?  Part of that was there to inoculate us against such a possibility, since the stage at the State Fair has no flyspace and is open to the sun (which makes lighting cues sort of hard to do).

We’re still trying to figure out how that’s going to work.  I’ll keep you posted.

Tabitha and I had to leave the Drama Festival immediately after our play so I could take her to another social engagement about half an hour south of here, so I missed Lauren’s musical number.

The overall 4H organization had asked if anyone wanted to do short acts between the plays, and Lauren and a few of her buddies took them up on it.  They practiced a few songs in the weeks leading up to the show, and finally settled on Rhett and Link’s Nilla Wafer Top Hat Time.

Because it made sense at the time.

Well, actually, no.  It didn’t make any sense then either, and that was part of its charm. 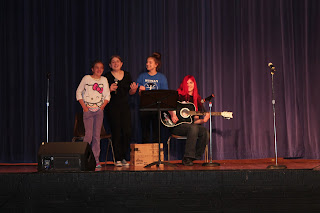 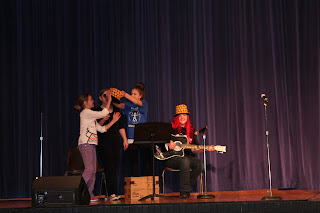 It was a good day for theater. 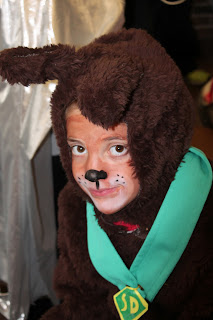