A Wedding In New York

I really hate traveling.  But I really love weddings.  There are times when this becomes a quandary, and when that happens there really is only one thing to do.

Just ignore me while the traveling part is still going on, that’s all.

My cousin Chris and his longtime partner Chris (yes, there were a lot of last names being used for clarity this weekend) got married in upstate New York on Saturday, at a beautiful old mansion overlooking the Hudson River.  We hemmed and hawed about it – it’s a long way, it’s finals week here, the girls are still in school, on and on – but really we knew we were going to go anyway.  It’s a wedding.  It’s family.  We’re there.  Grandma came down to take care of the girls, and Kim and I headed out early Friday morning.

This was my first experience with Southwest Airlines, which is the RyanAir of America except with a slightly less insane boarding procedure.  You check in online and get a number and then you board in numerical order, except that there are no assigned seats so if you are anywhere in the C group (as we were both in and out) the odds of you actually sitting next to the person you’re traveling with are fairly minimal.  And they serve peanuts, which in this day and age is just bizarre, although my outbound seatmate got only one peanut in his packet so perhaps they’re just slowly weaning themselves from that practice.

We arrived at LaGuardia safe and hungry (they were small packets of peanuts), so on the way out of town we made an unscheduled stop at a tiny little Jamaican restaurant – one of those neighborhood places where there’s more room on the sidewalk than the inside – and had jerk chicken that was just amazing.  That is the wonderful thing about places like that – great food at reasonable prices in wholly unreasonable quantities.  Plus the counter guy essentially adopted us as pets.  Two white tourists in his restaurant in the middle of Queens just tickled him somehow.

We found our way to Poughkeepsie and checked in to the hotel.

That night there was a reception at a restaurant whose name, translated out of French, means “The Chained Duck,” which is something I prefer not to think about any further.  It was quite a trip up to it – about 45 minutes north from the hotel, along a series of small state highways all of which were Rt. 9 in some variation or another.  All of the highways around that area of upstate New York are 9.  There’s 9N, 9S, 9W, 9G, 9D, and probably a few more that we didn’t drive on.  You know, guys, there is an infinite number of numbers out there.  You could try some of the others, just for fun.

But the food was lovely and the company was even better.  You never really get much of a chance to talk to the stars of the show at weddings – they’re always frantically tying down loose ends – but we did get to see the Chrises a few times, and we spent most of the evening happily noshing and hanging out with family members.  And we even managed to find our way back to the hotel without ending up back in Queens, so: Win.

We had most of Saturday to ourselves.  Most of my family hung out at the hotel, but Kim is an adventurer so she and I spent the day doing some of the touristy things that were in the booklet Chris and Chris gave us.  We had a grand time.

There is an old railroad bridge over the Hudson that is now a pedestrian crossing, so we headed toward that first. You park at one end, climb up the stairs, and head west.  The Hudson River Valley is just a beautiful place, so we took our time there on the bridge, looking up and down the river. 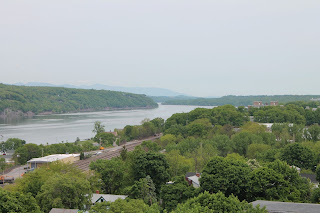 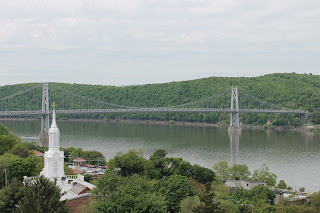 Just up one of the Rt. 9s from there is Hyde Park and the home of Franklin Delano Roosevelt.  For a man of such wealth and power it is a relatively restrained place – apparently his father wanted nothing to do with the extravagance of, say, the Vanderbilts, who were their neighbors to the north.  It’s also a cluttered place, as befits the style of the early 20th century. 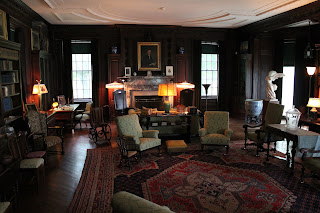 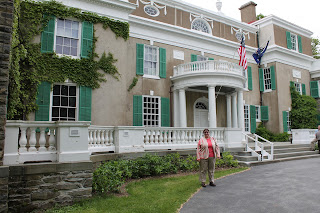 There are all sorts of things to look at along the grounds as well.  There was a statue of FDR and Eleanor that we of course took photos with, because you are legally obligated to do that with such statues, for example. 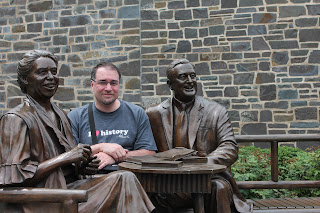 Both Roosevelts (and their dogs) are buried on the grounds, and you can wander over to that as well.  My favorite bit on the grounds, though, was a statue dedicated to FDR’s “Four Freedoms” speech and constructed out of bits of the Berlin Wall.  Apparently the sculptor was Winston Churchill’s granddaughter, which made a certain amount of sense. 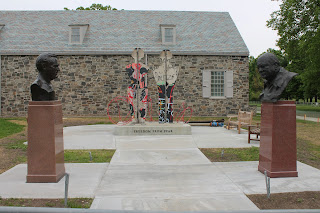 And then it was time for the Main Event!

Chris and Chris had the foresight to rent buses to take us from the hotels up to the site of the wedding, which as near as we could tell was in southern Ontario, a straight shot up the various Rt. 9s.  It was a beautiful place – an old mansion overlooking the Hudson – and the sort of mild, slightly overcast (i.e. not dazzlingly bright) day that you hope for with events like this. 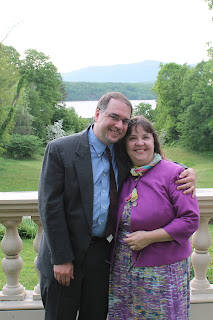 We milled around for a while, oohing and aahing over the scenery until it was time for the ceremony.  And then there it was – what we all came to see.  It was a simple ceremony, heartfelt and lovely. 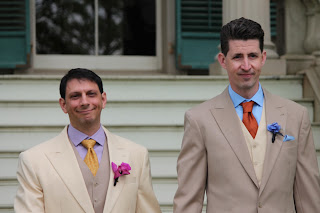 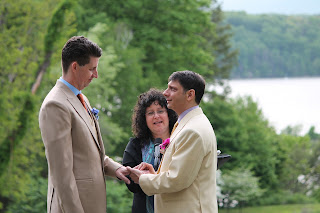 Weddings are wonderful things, because you have two people who love each other and are making a commitment to one another in front of the people who matter to them.  Everything else is extra.

Such as the reception, because at that point the hard work is over and it is time to kick back and celebrate. 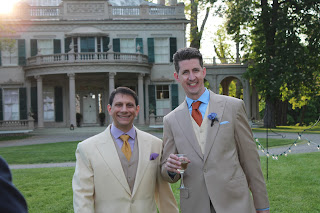 Although, as Chris and Chris pointed out, these days it is not really an official marriage until you update your Facebook status (which they did right there on their phones, so it’s all proper now).  We ate, we drank, we talked, we even danced for certain values of dancing, and then the bus took us back.

For me one of the best things about this was the chance to see my family.  We’re a scattered group these days and such events come all too infrequently, so when we get the chance we try to enjoy it as much as possible. 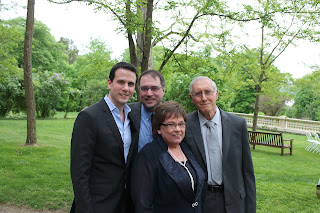 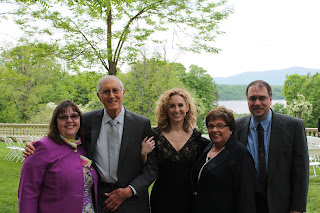 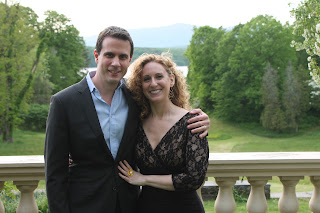 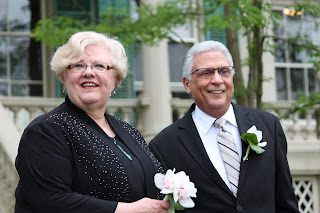 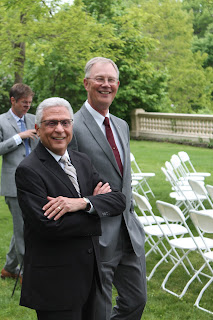 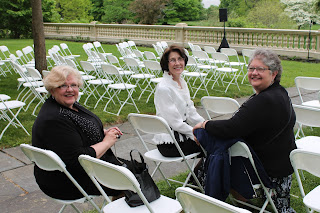 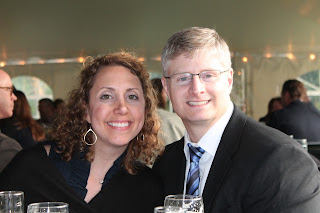 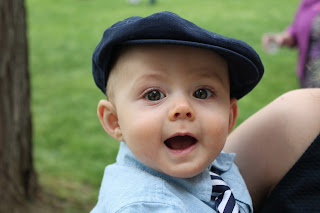 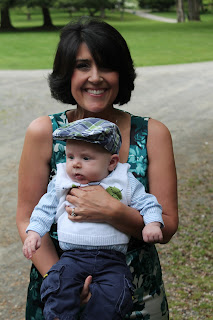 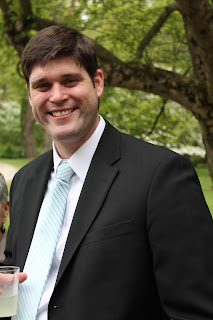 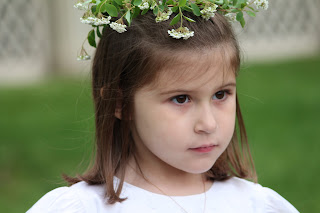 It’s easy to enjoy good things when you have good people to enjoy them with.

Chris and Chris have been together a long time.  We’ve long considered them married regardless of the state of the law.  On Saturday they reaffirmed that commitment openly and freely, before friends and family, and there is no lovelier thing in the world than that. 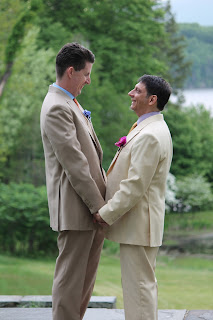 What a lovely post! Well worth the trip. :)
Congratulations to Chris Squared. (If I knew the right HTML, I'd attempt the superscript 2, but I don't.)

Nice. Although my wife points out that Poughkeepsie is downstate. Albany is capital region, and upstate is the Adirondacks.

John, I live in Wisconsin. Anything north and/or west of New York City is "upstate" to me.

You should have told me you'd be dining in Queens. I know some very ... errr ... authentic, yes I think "authentic" is the word I'm looking for here, restaurants in Flushing, Queens.

John - I thought about giving you and Nathan a head's up but we were on a fairly tight schedule - it was only sheer hunger that made us stop in Queens, and only luck that there was a good restaurant on the road out of town that we were already on.

When we have more time, perhaps. Although I suspect your definition of a sufficiently catastrophic value of horrible is set a lot higher than mine. ;)