My favorite part of my brief and rather unsuccessful track and field career, way back in high school, were the meets.

Practice was always a drag, especially since the coach never really made any allowances for the sprinters when it came time to warm up. Everybody run a mile, he’d tell us, not realizing that the reason we became sprinters was that none of us really had any desire to run anything more than 200 meters unless there were wolves chasing us. And since wolves were fairly scarce in the suburbs of Philadelphia at the time, we always felt a little hard done by.

But the meets were exciting. They were a constant barrage of races and events interspersed with droning announcements and runners milling about aimlessly while waiting to be told by one of those announcements where to report to next. And sometimes there would be something exciting going on.

Today was the annual city-wide track meet here in Our Little Town, the 84th time this has been done for the 5th graders, apparently. And it was exciting, as these things tend to be.

It was also cold. Last year’s version was at least 30 degrees warmer. On the plus side, you didn’t have to worry about sunburns this year. On the down side, well, sitting on a metal bleacher in 55-degree weather for three hours is something that would have been less troublesome when I was myself in 5th grade.

Kim was off at one of those administrative meetings that plague her world these days, so it was up to me to get everyone coordinated and off to the proper locations in time this morning. And having done that I headed off to the stadium and settled in for the event.

Promptly at 8:15am a fleet of school buses pulled up to the gates and disgorged squadrons of students resplendent in their eye-wateringly-bright t-shirts. They marched over to their respective portions of the bleachers, sat down, and as if on cue the announcer started droning on about who needed to be where.

Tabitha’s events were mostly at the beginning.

Her first event was the long jump, where she took third. 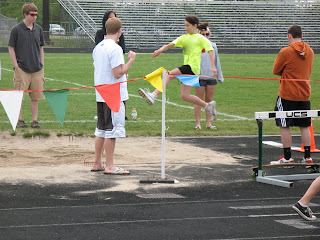 She promptly walked over to the 50-yard-dash line and survived the first heat to place 5th in the finals. 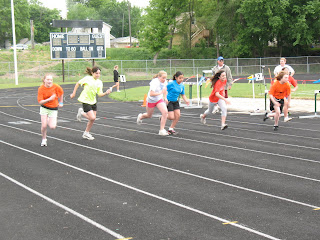 There followed a short break while we watched all of the other kids running, jumping and throwing. Some of them were most impressive. Others were mostly there to try hard and have fun. And the crowd – a rather large group for a Tuesday morning, when you think about it – cheered them on regardless.

After a while Tabitha was called out for the high jump, and when the dust settled it was clear that she had won it! Go Tabitha! 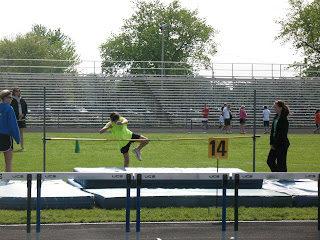 The final event of the day was the 4x50 relay, which involves nearly everyone and looks like nothing so much as the jailbreak scene from The Golden Compass, but with fewer wolves – wolves being fairly scarce in Our Little Town at present. And thus the narrative comes full circle.

The Not Bad President Elementary team fell victim to a bad baton pass in the first round, but made it into the finals and took third place.

It was a sporting good time. 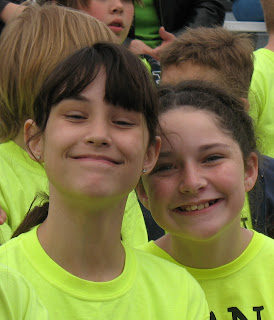 I won't run anywhere unless I'm being chased by a Giant Squid. That's my rule.

But both my children are excellent runners - leggy, with long strides. Just like Tabitha, actually.

I never knew you did track. The things you find out...

When it comes to sports and my husband, I'll quote brother Rick, "You married the laziest man in the world." He only runs to the kitchen to get something to eat.

Me, I've gone from hyperactive to being the bad one in the gym class. Hmm, maybe I'll write about that.

@Bea - well, it was early in my high school years, and it didn't pan out very well (although it had its moments). And I'm with Issam on the running thing these days. :)