Today was another in what has turned out to be a long line of theatrical presentations down at Not Bad President Elementary. And far be it for me to complain about this – I think it’s just wonderful. It’s been decades since I graduated from K-12, and to be honest most of the friends and times I remember from that period I found backstage. I’m glad my daughters are continuing that tradition.

Admittedly, I didn’t discover the theater until high school – they’re years ahead of their old man.

Which is as it should be.

Today it was Tabitha’s turn. She auditioned for a role in the 4th/5th-grade musical, Readin’, Ritin, and Rockin’ (Spellin’ being optional, apparently), and won the job of representing the school principal.

Fortunately the principal is a good sport about this sort of thing, even to the point of lending Tabitha one of her outfits as a costume. And wasn’t that a shock to this parent, seeing his daughter looking so grown-up like that. 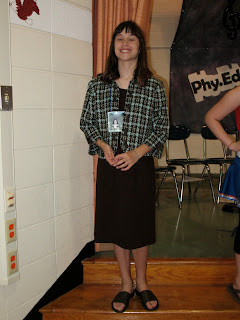 As with all NBPE productions, this one took place in the All-Purpose Room and was packed, just packed, with parents – I got there half an hour early and still didn’t get my choice of seats. Kim and Lauren joined me as curtain drew nigh, and eventually the cast of the show (normally referred to as “the entire fourth and fifth grades”) filed in.

And then it was a solid hour of entertainment fit for a king. 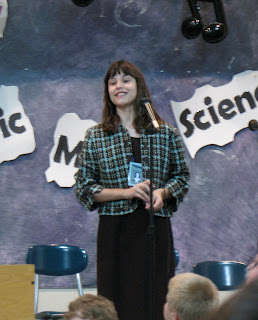 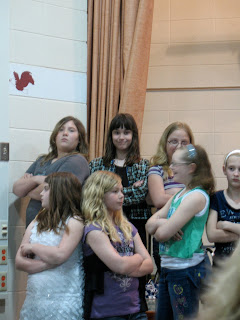 No, I have no idea what the plot was. I’m not sure it had a plot. Seriously, plot is overrated. Turn on any network's prime time line-up and tell me different.

Mostly it was a series of sketches, many of which contained songs. And Tabitha had not one but two – count ‘em, two – solos! One of which she had been given more than a week’s notice for!

She did a very good job.

One of the impressive parts of the play was the cast’s dedication to their craft, especially when the unexpected severe storm blew in about halfway through. The All-Purpose Room is a big empty space with a flat metal roof – the architectural equivalent of a bongo, in other words – and it was full of audience members who were all, unanimously, suddenly asking the same questions of each other in a very worried tone of voice: “Did I leave my car windows open? Is it too far to go check?”

Nobody left. A wet car is a small price to pay to see your child shine on stage, really.

Congratulations, Tabitha. I’m proud of you.
Posted by David at 7:29 PM

My goodness, does she look older! Have you loaded that shotgun, yet?

Still waiting. My goal is to equip her with the skills she needs so I won't have to.